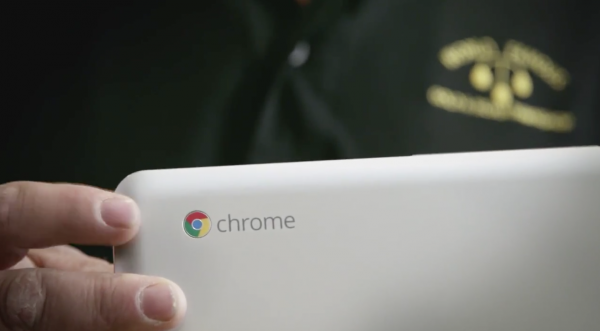 Whoa, twice now in less than seven days, I defend Microsoft's "Scroogled" advertising campaign. Seriously, someone deserves a fat Holiday bonus for hitting homers out of the marketing park. As good as anti-Google logo mugs and Tees are, the followup is better.

The Scroogled commercial featuring Rick Harrison and his dad from "Pawn Stars" is so effective that BetaNews has three posts debating the merits -- and there are loads more across social networks. Colleague Brian Fagioli calls the commercial the "best Scroogled ad yet", while Alan Buckingham says it's an "embarrassment". Hehe, they're both correct.

The word I see most often in my feeds: "Desperate", particularly around Google's fanboy watering hole -- the Plus social network. "Are they that desperate?" Alain Zarinelli asks. "And it's complete BS to boot". Stephen Scott posts: "Awful staged acting, beyond desperate mud slinging, it can only be one brand. Microsoft reaches new all time low with their latest anti-Google campaign. People got paid to make this ad campaign?"

Jake Weisz offers: "While the acting is terrible, it draws a lot of attention to a discussion Google would rather you don't have: That privacy matters". But the target here is Chromebook, which many commenters contend threatens Microsoft -- and there's something to that, if one-quarter of sub-$300 U.S. PC sales means anything. The figure comes from NPD.

The objective of any anti-marketing campaign is simple: Stir up lots of debate. Apple did just that with "Get a Mac" last decade, which effectively made fun of Windows using just two actors. The clever campaign is among the best ever in tech marketing. Scroogled is more blunt-force trauma, inflicting injury both ways. Google fans who typically criticize Microsoft will lambast the commercial, as they already do. Their reaction is free publicity that drives a wedge between the average consumer who isn't a fanboy to anything and what he or she knows little to nothing about -- Chromebook.

Weisz gets it. "I enjoy watching how much exposure Google fanboys give Microsoft's Scroogled campaign by resharing the videos just to whine about them. Not sure they realize that's how marketing works", he opines.

The commercial is brutally effective, because the protagonist is well-known and -- in his really-TV role -- commands authority. Each week on History Channel, Harrison evaluates things people want to sell. Chromebook isn't worth much because "it's not a real laptop".

Let's examine how the commercial is effective, using the "extended" version:

1. The woman trying to sell the Samsung Chromebook received it as a gift from her mom, which infers the woman didn't want or couldn't use the computer.

2. The ad jumpcuts to Harrison laughing after the woman affirms the Chromebook's value by calling it a "laptop".

3. Harrison evaluates the Samsung: "When you're not connected, it's pretty much a brick". That taps into the most-raised concern I see in any meaningful Chromebook discussion around blog posts, retail websites or social networks.

4. Pure anti-marketing genius: Harrison identifies Google's Chrome logo as symbol for what not to buy. "See this thingy", he says pointing to the logo, "that means it's not a real laptop". Holy frak! It's rare to see any marketer turn a competitor's brand into a liability.

5. "It doesn't have Windows or Office", Harrison says of the Chromebook. "Without WiFi, it doesn't do much at all". These are the right talking points.

6. The commercial turns the benefit Google touts most -- the cloud -- into a liability. "When you are online, Google tracks what you do so they can sell ads".

7. Then comes the body blow: "Google is always trying to find more ways to make more money off your personal information. This Chromebook hardware makes it even easier for them".

8. Harrison's business is all about assessing something's value. The man has authority -- and a TV show. He wraps up by saying he can't buy everything, "especially when it's not what it appears to be". The insinuation is absolutely clear.

People can debate about Microsoft duplicity and tracking users much as Google does. But that's not the point. Anti-marketing is all about creating FUD -- fear, uncertainty and doubt. As Microsoft's mid-2000 decade "Get the Facts" program proves, effective FUD marketing can nip competing products before they take root. That campaign helped keep Linux from achieving any meaningful PC adoption.

Any debate, especially from fanboys, just surfaces apprehensions the mass of PC users already have. Remember: The traditional personal computer running applications is the incumbent here. Chromebook is a would-be contender. Moving people to something new is much harder than keeping them where they are, and the "Pawn Stars" commercial gives good enough reasons to stay put.

Geeks and fanboys can argue merits, but they often mean nothing in marketing.

44 Responses to You call 'Pawn Stars' Scroogled desperate, I say it's bloody brilliant