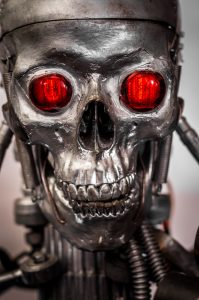 While the Terminator films were make-believe, there was definitely some real knowledge mixed in with Arnold's "Hasta La Vista" one-liners. The greatest take-away is machinery replacing humans. While I don't think my toaster will ever become self aware and kill me, the possibility of humans losing jobs to machines is very real and already happening.

I was recently invited to Detroit by Ford Motor Company, where I had the opportunity to tour the factory where the F150 truck is made. While much of the work is done by humans, I was taken aback by some of the quality inspection being done by robotic arms. Surely, that had been a human's role at some point and it made me a bit sad. At the World Economic Forum in Davos, Eric Schmidt, executive chairman of Google, warns that IT will suffer a similar fate as the automotive industry. In other words, there is a war brewing between humans and machines.

"The race is between computers and people and the people need to win. I am clearly on that side. In this fight, it is very important that we find the things that humans are really good at", says Schmidt. He further says, "it is pretty clear that work is changing and the classic nine to five job is going to have to be redefined. Without significant encouragement, this will get worse and worse".

While I am glad that Mr. Schmidt is on the side of humans, we already know the things that humans are good at -- everything. Let us not forget that these machines and computers were invented by humans. Heck, we built the pyramids!

What is troubling to me is that he speaks about humans as if he isn't one. This is worrying since he holds huge power over the the world's information. Is extreme wealth and isolation from the common man, giving him a God complex?

Sure, as traditional workstations are replaced by tablets and less complex operating systems, the role of IT will diminish over time. However it is a bit hypocritical for Google to play the role as a sympathizer for the human race. Let us not forget that Google is investing in robotics while turning us into cyborgs with Google Glass. If humans do lose the employment war to machines, Google will be partly to blame.

Do you think Eric Schmidt is on the side of machines or humans? Tell me in the comments.