The underwhelming Nokia Lumia sales from Q4 2013 have put a damper on Windows Phone's momentum, as, for the first time last year, the Finnish maker moved less units compared to the previous quarter. Growth was already slowing down, as I pointed out three months ago, but a decline in moved units was unexpected, potentially leading to irreparable damage, in the short and the long run as well, for the market share of the tiled smartphone operating system.

Lumia sales are extremely important for the growth of the platform because Nokia's Windows Phone market share has been holding steady around the 90 percent mark for a very long time. This means that if the Finnish maker has a great quarter, in regards to Lumia sales, the tiled smartphone OS has a better chance of holding its own against Android and iOS, and increasing its market share. Luckily, we do not have to wait any longer to find out how the Lumia sales from Q4 2013 have impacted Windows Phone, as Kantar Worldpanel ComTech just released a report for the respective quarter.

Windows Phone's market share does not display consistent growth, or decline, across all markets monitored by the firm, which is not surprising considering that some regions have matured faster than others when it comes to smartphone penetration. Also, some vendors, especially Apple, have traditionally had very strong sales in the last quarter of the year, which may in turn seasonally impact the market share of competing operating systems. Now let us take a look at the numbers in the report.

It is worth pointing out that the results cannot be extrapolated to all of Europe, as, obviously, the preferences of smartphone buyers in remaining local markets are not presented in the report (and, definitely, not the same considering, among other reasons, financial differences).

Market share-wise, of the five European countries Italy is the one where Windows Phone is most popular (17.1 percent) while Spain is the one where it is least popular (5.6 percent). In both said countries, the tiled smartphone OS grew significantly in Q4 2013 compared to the same period of last year. When compared to the three months ending November 2013, Windows Phone's market share only decreased in France (from 12.9 percent to 11.4 percent), of the five European markets.

"Windows Phone has now held double digit share across Europe for three consecutive months", says Kantar Worldpanel ComTech strategic insight director Dominic Sunnebo. "Unfortunately for Nokia the European smartphone market is only growing at 3 percent year on year so success in this market has not been enough to turn around its fortunes -- reflected in its recent disappointing results".

Moving away from Europe, Windows Phone's market share also registered year-over-year growths in Australia (to 5.2 percent from 3 percent), China (to 1.1 percent from 0.9 percent) and US (to 4.3 percent from 2.4 percent), but decreased in the three monitored Latin American markets, Argentina, Brazil and Mexico (to 4.9 percent from 6.8 percent). That last bit is important, as the setback (any setback, really) is significant.

When compared to the three months ending November 2013, Windows Phone's market share for Q4 2013, in the aforementioned markets, decreased across the board. In Australia, China and US, it dropped from 6.9 percent, 2.7 percent and 4.7 percent, respectively. The decline in Australia is the largest here but, as the firm's strategic insight director Dominic Sunnebo pointed out earlier this month, China and US are the markets where Windows Phone should have held its ground and march forward: "You don't have to conquer China and the US to win in the smartphone market, but you do need success in one of them".

It is also interesting to point out that Kantar Worldpanel ComTech does not list Windows Phone's market share in Japan, as it did in the previous report. The trend so far does not favor the OS anyway, which then had a market share of zero percent in the land of the rising sun, so its standing is unlikely to have changed since, in an iPhone-dominated market (68.7 percent market share). 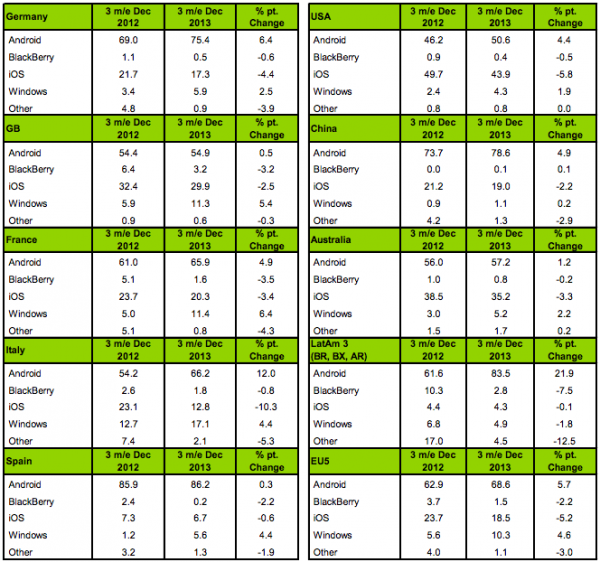 As the above table clearly shows, iOS is losing traction in Europe, as its market share decreased across the board year-over-year. Android, however, continues to grow in all monitored markets. That said, in places like Australia, China, US and, as I mentioned earlier, Japan, iPhones still have a strong local presence.

In order to get anywhere close to iOS, Windows Phone would therefore have to maintain a year-over-year growth of at least 100 percent for two years. Meanwhile, Apple's smartphones would have to sell as well as they do now, or less. Even so, based on the current numbers, Windows Phone needs close to three years to overtake the iPhone's global market share. That is unlikely to happen, especially if the former's vendors  have more bad quarters in the foreseeable future.