Today's Google-Intel event is a turning point for Chrome OS. The matchup is more magnanimous than Apple shipping the first x86 Macs eight years ago. Intel is after all the other half of Wintel, and the company's coming out for Chrome OS endorses the browser-based operating system as mainstream -- as do a rash of new Chromebooks announced or released over the past month by Acer, Dell, Lenovo, and Samsung.

Chrome OS has huge momentum in the education market, for example. There are news stories about school conversions nearly every week. Those are sales taken away from Apple or Microsoft platforms. Success is shocking, because every new operating system directly competing with Windows has failed since release of version 3.1 two decades ago. The Microsoft monopoly is insurmountable, or was until Google's entrance.

Chrome OS success defies historical precedent. The old axiom is this: no one launches a new desktop PC operating system and succeeds, because:

The first is typically the most difficult. Rival Windows operating systems, like BeOS, failed if for no other reason than the chicken-egg scenario. Which comes first? Platforms need
applications to succeed, but developers have little financial incentive to create them when adoption is low. If there are no apps, people don't adopt the platform.

Google has apps -- lots of them -- and Chrome OS benefits from more than two decades of browser development.

Chrome and Chrome OS rise like specters to haunt Microsoft and Windows. They reincarnate Netscape Communications’ vision of the browser as a platform for delivering applications. Founded in 1994, Netscape Communications developed the first commercial web browser and set in motion Wall Street’s obsession with Silicon Valley startup IPOs.

But earlier, even while distracted developing Windows 95, Microsoft cofounder Bill Gates looked to dangers ahead. In his May 1995 "Internet Tidal Wave" memo, Gates wrote that "browsing the web, you find almost no Microsoft file formats". He observed not seeing a single Microsoft file format "after 10 hours of browsing", but plenty of Apple QuickTime videos and Adobe PDF documents. Microsoft’s visionary founder predicted: "The Internet is the most important single development to come along since the IBM PC was introduced in 1981. It is even more important than the arrival of the graphical user interface".

Gates saw in Netscape a platform threat to Windows, and the startup sought developers to create applications for the browser instead of traditional operating systems. Responding, Microsoft engaged in what the U.S. Justice Department later characterized as the "browser wars", leveraging the Windows monopoly to crush market-leading Netscape.

Whether by measure of browser or operating system, Google has created the rival platform Netscape product managers envisioned in the late 1990s.

In June 2007, I wrote "Why Google Succeeds" for Microsoft Watch; the content remains hugely relevant seven years later (but, sigh, the site no longer exists). "Unchecked, Google is on course to be the next hugely successful computing platform", I predicted. Microsoft mis-identified the competitive problem in the late 1990s -- not Netscape but the web itself. Already, by mid last decade, many developers had made the web priority over Windows; hence, cloud computing. "Developer interest in the web platform -- and the promise of information access anytime, anywhere, and on anything -- shifts standards away from Microsoft’s dominant platforms", I explained in 2007. Google rode the web platform’s coattails, pushing adopted or open standards along the way. 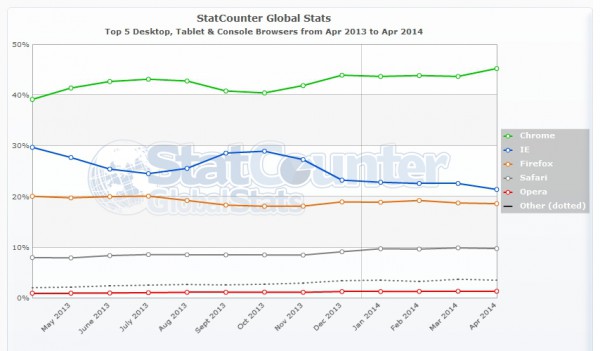 Google had the foresight to launch the Chrome Web Store in 2010. Web apps run in the browser or Google OS. So anyone using Chrome can carry them to the operating system. The search and information giant also provides a tightly-integrated suite of cloud services, such as Docs and Gmail, that cover categories businesses already use; switching is as easy as logging into Google Account on a new PC; Chrome OS fits because the browser is the most familiar motif people use every day.

That segues back to the other two reasons why platforms fail, switching costs fall for consumers or businesses that already have adopted Google cloud products and services. If your company uses Google Docs, for example, training and other costs related to moving from Office are already actualized. Finally, leveraged from search, many Google products or platforms -- and third-party developers supporting them -- are familiar. They fit with users’ digital lifestyles.

With Chrome, Google presents a vividly familiar user interface. For years, Microsoft has pitched the value of Office and the extension of its motif to educational and business IT purchasers. Rationale: The number of people who work in Office make the UI natural. Perhaps, but the Internet population using browsers is larger. The browser has greater value as the most natural user interface -- not necessarily for being better but for being ubiquitous. Google makes the familiar browser the gateway to all things Chromebook.

Chrome OS isn’t pretty, but the browser motif is remarkably functional. Chrome fills the screen and contains most task-related actions to a single, horizontal quadrant that also is more eye level. You look away from the working screen area less often, as the eye shifts from browser tab to tab. Tabs are tidy. Anyone could mimic such behavior by running the Chrome browser full screen on Mac or Windows PC and using only cloud services and web apps. Try this for a week and see if you find the tabbed browser a less-distracting, less-time-wasting way of working.

Microsoft is in no immediate danger of losing its two desktop monopolies, but Chrome OS and supporting web apps erode them bit by bit, which is success no other modern operating system can claim. Apple's platform predates Windows 3.1, and, yes, new architecture debuted 13 years ago. Linux's traction is mostly confined to servers. There is little desktop adoption. Until now, since Chrome OS is essentially a browser running on top of a Linux core.