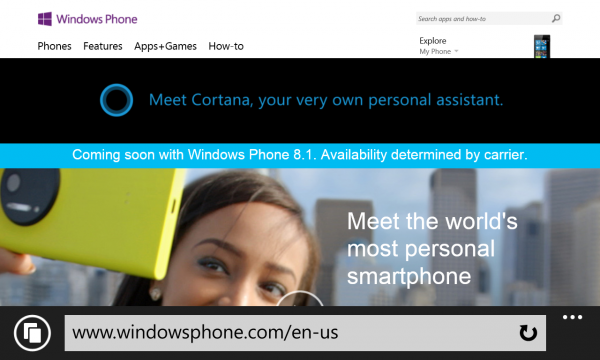 Microsoft officially announced Windows Phone 8.1 at the Build conference in early-April, and later released a preview build to developers and early adopters. The new iteration of the tiled smartphone operating system comes with important new features and improvements over its aging predecessor, among which being the much-awaited notification center and the Cortana personal assistant. The upgrade has yet to be rolled out to Windows Phone 8 smartphones.

As it is gearing up for the public availability of the OS, Microsoft has detailed some of the most important changes it introduced in Internet Explorer 11 for Windows Phone 8.1. By the looks of it, the browser is finally able to rival what the likes of Chrome offer on competing platforms.

As users may know, Internet Explorer's implementation of file downloads offers little control over the process. Only files which apps can open are supported by the download manager, and there is no option to actually save downloaded files (they are opened automatically, again if supported, in an app). It is a significant omission on Microsoft's part in a time when every other browser that matters offers this feature. The software giant has now solved this problem in Windows Phone 8.1, as tapping on a file link in Internet Explorer 11 triggers a prompt which gives users the ability to open or save (download) the item. Finally!

Another change that will significantly impact the user experience is the support for in-line (in the page) video playback. This makes YouTube, as well as other similar sites, much more usable in Internet Explorer 11, as the playback is no longer a full-screen-only affair. I believe most users will continue to resort to third-party apps, like MyTube and Metrotube, to watch YouTube videos, but it is a nice improvement nonetheless. And just like those kind of apps, Internet Explorer 11 can keep the video running even when the Windows Phone 8.1 device is locked.

Viewing websites on a small screen can be difficult at times, especially when there is no mobile version available or when the browser does not offer text reflow. To make it much more enjoyable to read articles on a Windows Phone, Internet Explorer 11 comes with Reading View, a feature which boosts the text size for legibility and optimizes the layout of the website for mobile reading. It looks much like Pocket renders saved articles.

With the introduction of password sync, there is also a new prompt which asks users whether they wish to have Internet Explorer 11 save their passwords. This is yet-another "finally" type of improvement. And, because Internet Explorer has no (reachable) tab limit on the desktop side, the Windows Phone 8.1 version now no longer comes with one too. Windows Phone users have been limited to six opened tabs.

Going back is an action which has been implemented poorly, due to the lack of easily-accessible navigation buttons. Now, gesture support is implemented, allowing users to swipe sideways to go back and forth. It is pretty strange to see Microsoft saying "Similar to your PC or tablet (noticing a trend? ) you can now swipe to go back and forward". The feature should have been available first on Windows Phones, and not the other way around, Microsoft.

Microsoft has made the browser faster, better at predicting URLs, safer, mobile data-efficient thanks to DataSense, and better for those who need to use accessibility mode. Private browsing and live tile support for websites are also introduced.

Microsoft has done a good job with Internet Explorer 11 for Windows Phone 8.1, solving many of the issues users have reported throughout the years. It took the software giant quite a bit of time to get here, and hopefully we will not have to wait just as much until the next slew of improvements.

12 Responses to Top changes in Internet Explorer 11 for Windows Phone 8.1