Everything you need to know about Windows 9 ('Threshold') 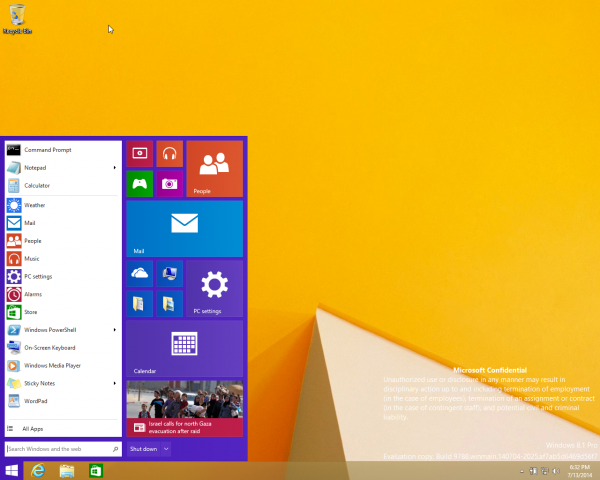 At launch, Windows 8 was a mess. It was a brave and -- arguably -- necessary attempt by Microsoft to re-invent its operating system and keep it relevant as the world transitioned towards mobile computing, and tablets in particular. But the first release was seriously half-baked, and left many Windows users scratching their heads in confusion. Windows 8.1 improved things massively, and Update made the OS even better, especially for previously neglected keyboard and mouse users. But Windows 8.x’s poor market share tells a clear story -- the OS has flopped badly, and it’s time for Microsoft to chalk it up to experience and move on.

Windows 9 (aka Threshold) is expected to be the operating system that Windows 8.x should have been, just as Windows 7 was the OS Vista should have been. According to The Verge, we’ll get our first proper look at the next Windows iteration on September 30, but we already have a fairly good idea of what to expect.

The biggest change will of course be the re-introduction of a Start menu for keyboard and mouse systems. We’ve seen leaked screenshots of this (the one above being an example), and it looks good. It takes the Windows 7 Start menu and adds tiles from the Windows 8.x Start screen, to produce a hybrid menu that offers the best of both worlds. The menu will only be available to desktop users (obviously), and they’ll be able to toggle the tiled part on or off, which will please anyone who really, really hates the look of the tiled UI.

The divisive Modern UI will still exist for PC users (well those who want it), but be much more closely integrated with the desktop. Users will be able to run Modern apps in windowed mode on the desktop, which is definitely a step in the right direction.

Windows 8.x’s Charms Bar -- the menu that pops up on the right hand side of the screen when you hover your cursor in the bottom right corner -- is to be removed from the desktop. Microsoft will probably keep it on tablets as it works very well there.

Multiple virtual desktops are expected to make an introduction in Windows 9, a handy feature Linux (and Unix) users have enjoyed for a while. This is a great move from Microsoft, and shows the company’s renewed commitment to power users.

Microsoft's digital assistant Cortana is set to be added to Windows 9 too (Siri is expected to be added to OS X at some point in the future as well). In early leaked builds she's accessible from the taskbar, but that could well change.

Expect to see numerous other UI and cosmetic tweaks as well -- Microsoft needs to distance Windows 9 from its predecessor, and a fresh coat of paint will help here. Don't be too surprised if taskbar icons look and behave more like mini live tiles.

With Windows 8, Microsoft gambled on a future where we all downed our keyboards and mice and switched to touch systems. Falling PC shipments and rising tablet adoption made that look like a fairly safe bet, but fast forward to now, and tablet sales are dropping and PC sales are stabilizing, so Microsoft has to reevaluate its focus.

There’s a large Windows user base out there who feel Microsoft chose to abandon them when it rolled out an operating system aimed at an entirely different audience, and Microsoft has a chance to woo them back with Windows 9. From what we’ve seen so far, it looks as if the tech giant is making all the right moves.

The Verge says Microsoft is set to unveil Windows 9 at a press event on September 30 (although the actual date may change, and the official OS name may not be mentioned then either), with a preview version made available to developers on the day or slightly later. The finished OS is expected to ship in spring 2015, although I wouldn't be surprised if it slips into the summer or beyond.

I love Windows 8.1 but I have very little to do with the Modern UI on my desktop system, so I’m genuinely excited to see what Microsoft is working on. What about you?