Apple hits Google where it hurts

I have some advice for the European Union Competition Commission: Lay off. You don't need to reign in the Google monopoly. Apple will correct the market around search and mobile. That's one of two related takeaways from Monday's WWDC 2015 keynote. iOS 9 and OS X El Capitan up Apple's push into search and proactively-delivered information in big ways. That is if delivery is as good as the company promises.

The other takeaway harkens back to what I told you last week about Tim Cook's piracy rant against unnamed Facebook and Google alongside the friggin U.S. government -- plural if thinking beyond the Feds: It's BS marketing. Apple prepares a major competitive assault against Big G, hitting where damage can be severe: Perception and profits. I cannot overstate Google's vulnerability, which ironically is where the search and information giant exploited Microsoft during this Century.

During its rise to dominance, Microsoft adopted an effective competitive technique: Bundling. The company would offer two, or even more things, for the same price as a competitor's one. Consider, for example, the debut of Office which served up presentation, spreadsheet, and wordprocessing applications for what Lotus or WordPerfect charged for single software.

Microsoft also increasingly incorporated into Windows, for free, features that other companies sold separately in single apps. That practice eventually contributed to the filing of antitrust cases in Europe and the United States. Free proved to be a powerful weapon. Microsoft could give away valuable technology in Windows, because the whole operating system, and applications like Office, was the profit center.

Google's success against Microsoft with products like Apps and Gmail is similar. They serve to facilitate the information giant's real profit center around search while grossly undercutting pricing for products like Office and Exchange. Google did to Microsoft what it had done to so many competitors: Use free stuff as a club.

Apple's position with respect to Google is similar. The fruit-logo company mainly generates revenue from hardware, enabling it to offer some services and software for free. Okay, but free is free -- whichever of the two gives it, right? Wrong. Apple positions its free as superior by beating the your privacy is at risk drum. The company promises to protect your personal information while accusing other gimme-givers of selling your privacy for profit. The marketing plays on users' fears, whether or not legitimate.

Siri, which importance I will expand on in the next paragraph, promises to be on iOS 9 more like Google Now on Android; maybe much better. "Now Siri can search a wider range of topics for a wider range of answers", Apple marketing claims. "It understands what you say more accurately and delivers your results faster. iOS 9 is smarter in lots of other ways, too -- giving you helpful suggestions before you even ask".

The implications are profound: Apple will do search and provide more proactive, contextually-valuable information to its device customers. During the WWDC keynote, the company demarcated clear privacy parameters: Your information stays on your device, where iOS 9 and Siri learn from your behavior. Apple becoming a serious search provider is a big, fraking deal.

Apple is right to focus on voice, which is a much more natural user interface for a mobile device than touch. More importantly, if Siri could actually get the answers right, Apple would have a powerful competitive weapon to blast away Google mobile search share. There, Cook's 'doubling down' is as much, if not more, about transforming the mobile search experience, and that means butting heads with Google. Better: Someday replacing Google with Siri search on iOS devices. But that's not viable as long as Siri sucks.

The difference in Apple's execution three years later serves customers and undercuts Google. Big G feeds off information that others produce by wrapping around contextual advertising services. Apple only needs to know about you for you, because it profits from hardware and related services. Not advertising. If Apple's pro-privacy marketing and technology deliver what people want, for free, Google is in for trouble long term. The big word is If.

Now would by a good time for Apple to release a sequel to the "1984" commercial that launched the Macintosh, with Google taking the Big Brother role assigned to IBM. If Apple's marketing team isn't thinking about something like this, they should. Give me a ring. I have some ideas for you.

Beating Google at the free game relates to something more important. Apple's business model is all about defining and controlling the customer experience. The philosophy is fundamental to end-to-end delivery of hardware, software, and supporting services. But search is outside the company's reach, when delivered by Google from Safari or Microsoft in Siri. Apple must meet customers' broad informational needs to truly be in control. That means delivering better search and proactively providing information that is contextually relevant (e.g. what's important to you when needed). 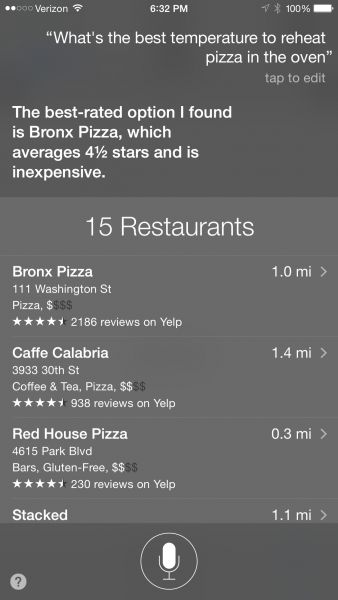 Something else: Humanity is core to Apple's cultural DNA. Just look back to the marketing for the original Macintosh in 1984. The design ethic then, and remains so 30-plus years later, is making the machine more human -- more responsive to you; more extension of you.

No example in practice is better than iPhone. In June 2007, Apple supercharged the smartphone category with a more natural user interface. Suddenly, there was a new way to interact with a mobile handset that was seemingly magical. Humanness made the original iPhone stand apart from all competitors, and Apple used a variety of sensors to imbue the quality. Touch, and its intimacy, and the way the handset responded to your proximity gave it the human quality.

Four years later, Siri looked like the design ethic's next leap forward, by adding human-like personality and extending the mobile user interface to another sense more important than touch: Voice. Problem: There was something inhuman then, and remains now, about Siri's often frustrating responses to questions. The screenshot is example. Last night, I asked the question, which the feature got right, but the answer is meaningless. I wanted to reheat pizza not buy another pie.

If the proactive capabilities of Siri on iOS 9 live up to promises made during the keynote, Apple can fulfill both design objectives: Deliver more end-to-end customer experience that it controls and imbue even more human-like responsiveness to iPad and iPhone.

Meanwhile, the piracy marketing rant shakes the tree to see what Google-fearing customers fall out. Side-benefit: Apple can excuse when Siri isn't as good as Google Now by waving the privacy flag: "Google provides more because it snoops more. We give you a little less by not taking more".

Apple is known as a category disruptor by practicing imitative innovation. Stated simply: Do even better what someone already does. Disrupting Google might seem like an unsurmountable task. But eight years ago so did iPhone competing with Nokia, which is where today?

27 Responses to Apple hits Google where it hurts