Which version of Windows 10 is right for you? 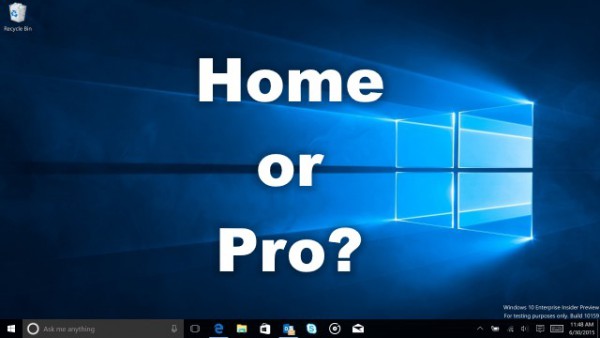 It's not long since Microsoft revealed the various editions of Windows 10 that will be available. We're now in the launch month and the preview builds are rolling out thick and fast to Windows Insiders. But when the big day rolls out, which version should you opt for?

If you're upgrading from Windows 7 or Windows 8, it's a fairly simple process that can be taken care of by Windows Update. For those who have decided to make the upgrade, Microsoft will automatically migrate you to the equivalent version of Windows 10. But if you're running the Home version of Windows, what are you missing out on? Is it worth thinking about going Pro? Microsoft has a handy guide to help you decide.

With Windows 10, there are four key versions to consider: Home, Pro, Enterprise, and Education. As shown by Microsoft's Windows 10 version comparison website, all four have the same 'core experiences'. Everyone gets Cortana, virtual desktops, Microsoft Edge, and so on. But if you look at things from a more business-centric view (something which many home users will do anyway), it's a slightly different story. Now the differences between the versions become clear.

It goes without say that Windows 10 Home has the fewest features, but this is unlikely to be a problem for most people. By moving up to Windows 10 Pro, you gain extras such as Bitlocker, Remote Desktop, Enterprise Mode Internet Explorer, and other options. If you need Windows To Go Creator, AppLocker, Credential Guard, and the like, you'll need to opt for Windows 10 Enterprise.

Check out the Windows 10 version comparison website for full details. You can take a look through the online version of the comparison, but Microsoft has also produced a PDF that displays the same information on three pages.

9 Responses to Which version of Windows 10 is right for you?