How to completely avoid upgrading to Windows 10... forever 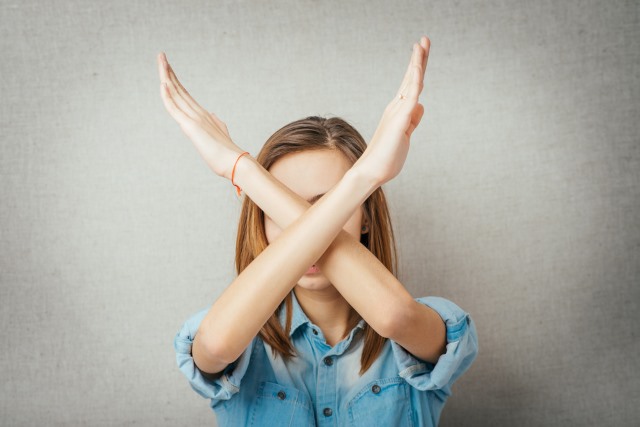 Since the launch of Windows 10, Microsoft has -- for want of a better way of putting it -- pissed off a tremendous number of people for the way it has tried to force the latest version of the operating system onto people. Some people found set up files were automatically downloaded, others were forcibly upgraded practically against their will, but plenty of people have been irritated by constant nagging about the availability of an upgrade they’re simply not interested in. Never 10 is a new tool that should mean the end of this pestering.

Various tools and techniques have been spawned as a result of things, providing fans of Windows 7 and Windows 8.1 with ways to avoid Windows 10 and Microsoft's adverts for it. Maybe you're holding out for more feature-complete builds from the Redstone branch, or perhaps you just don’t like change. You would think that Microsoft would understand that 'no' means 'no' but there have been countless stories of people who have declined the Windows 10 upgrade finding themselves subjected to continued nagging. A registry hack can be used to block nags and upgrades, but Never 10 is a free portable app that does the hard work for you.

Never 10 is a free tool from Gibson Research Corporation which places users firmly in control of whether Windows 10 is installed or not. While the name might imply that it is all about avoiding Windows 10, this is just part of the story. It's entirely possible that you might change your mind further down the line, and Never 10 can also be used to lift the upgrade block once you have put it in place.

But the primary purpose of Never 10 is to prevent Windows 7 and Windows 8.1 from being upgraded to Windows 10. As the authors say:

Many users of Windows 7 and 8.1 are happy with their current version of Windows and have no wish to upgrade to Windows 10. There are many reasons for this, but among them is the fact that Windows 10 has become quite controversial due to Microsoft's evolution of their Windows operating system platform into a service which, among other things, aggressively monitors and reports on its users' activities. This alone makes many users uncomfortable enough to cause them to choose to wait. Additionally, a few months into 2016, Windows 10 started displaying unsolicited advertisements on its users' desktops.

Using Never 10 is simplicity itself. Run the tool on your computer and you'll be presented with one of four screens. 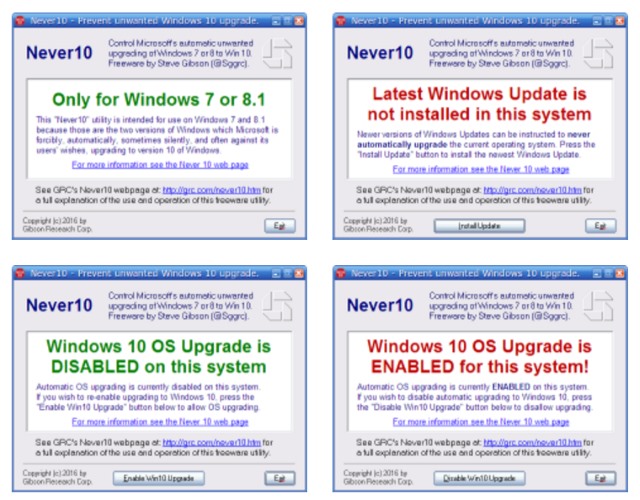 If you run it on a Windows 10 computer, Never 10 can do nothing for you -- although you may still be able to manually roll back to Windows 7 or Windows 8.1. Otherwise, you will be given the option of disabling or enabling the upgrade to Windows 10, as well as ensuring that you have the latest version of Windows Update installed.

The beauty of Never 10 is its simplicity. It's a portable app, so there's no need to even install it; if you're the technological go-to-guy/gal, it's a valuable tool to stick on a USB drive to use on friends' and family's computers.

Download your free copy of Never 10 from Gibson Research Corporation.

228 Responses to How to completely avoid upgrading to Windows 10... forever