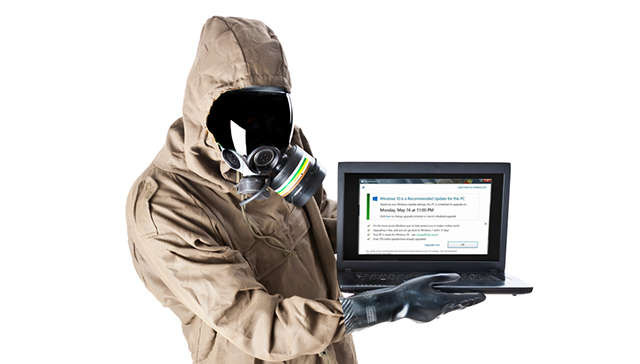 When Windows 10 was first offered to users of Windows 7 and 8.1 it was via a pleasant upgrade tool that allowed users to 'reserve' their copy of the new OS. However, as time has gone by, Microsoft has employed more and more insidious methods to get people to upgrade, including tricking them into doing so.

The sneaky behavior has gotten so bad, that growing numbers of users of the older operating systems have taken to disabling critical updates in order to completely avoid Windows 10.

Microsoft has, in the past, explained away its aggressive upgrade strategy as a way to get users to a "safer place". Yet, ironically, by attempting to force Windows 10 onto people who don’t want it, the software giant has instead caused paying customers to disable security updates in an effort to avoid Windows 10 content being pushed on to their systems.

It’s not an unreasonable fear either. Three months ago, Windows 10 advertising was added to an Internet Explorer security patch, a move I described at the time as a new low (little did I know Microsoft was preparing to stoop even lower).

After my last rant about Microsoft’s tactics, I had emails from two readers, both asking if there was a reason why I hadn’t suggested users of Windows 7 and 8.1 completely disable updates in order to avoid Windows 10.

The simple answer is because avoiding critical updates is dangerous and puts your system at risk.

But I can understand why users are doing this. They don’t want Windows 10, but saying no to Microsoft appears not to be an option.

As Brad Chacos at PC World points out today in an article which discusses this very problem, "Using that critical avenue to push Windows 10 on people -- pardon, "make it easier for consumers to upgrade to Windows 10" -- violates the trust people hold in the sanctity of Windows Update".

That’s spot on. Microsoft’s security updates are supposed to protect Windows users from threats, but customers are disabling the updates to avoid a different type of 'threat' -- from Microsoft itself.

It’s a sad, sad state of affairs, but hopefully after the free period expires on July 29 Microsoft will scale back its Windows 10 push, and users of older operating systems will once again be able to download critical patches without fear of their systems suddenly turning into Windows 10 overnight.

But that said, there’s a famous quote (I’m not sure where it originates from unfortunately) which applies very well here -- "trust takes years to build, seconds to break, and forever to repair".

I imagine there will be a lot of Windows users who will struggle to fully trust Microsoft again after all this, and with good reason.

290 Responses to Windows 7 and 8.1 users turning off critical updates to avoid Windows 10 'malware'