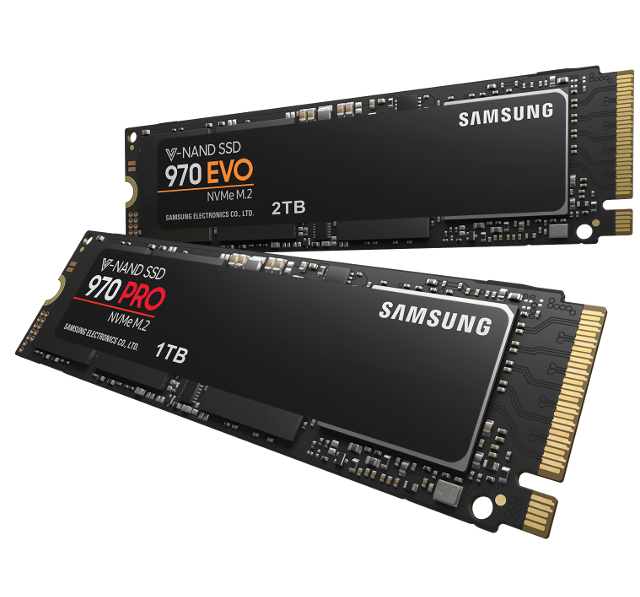 Samsung solid state drives are the gold standard of storage. True, there are other brands that sell quality SSDs, but Samsung's offerings are not only blazing-fast, but very reliable too. If you can afford it, you shouldn't consider any other brand.

Today, Samsung announces its most impressive solid state drives yet -- the 970 PRO and 970 EVO, both of which are M.2 PCIe NVMe variants. The PRO model features capacities up to 1TB, while the EVO goes up to 2TB.

The famed-manufacturer further says, "In addition to the advancements in performance levels, the 970 PRO and EVO deliver exceptional endurance and reliability. Featuring a five-year warranty, or up to 1,200 terabytes written -- 50 percent higher than those provided for the previous generation -- the 970 PRO and EVO are built to last. The Dynamic Thermal Guard technology safeguards against overheating by automatically monitoring and maintaining optimal operating temperatures, while a heat spreader and new nickel-coated controller further lower the SSD temperatures."

Unfortunately, you cannot buy these impressive solid state drives today. Thankfully, you will not have to wait long, as they will hit stores on May 7. Pricing for the EVO begins at $120, while the PRO starts at $330. Obviously, prices will increase with capacity.