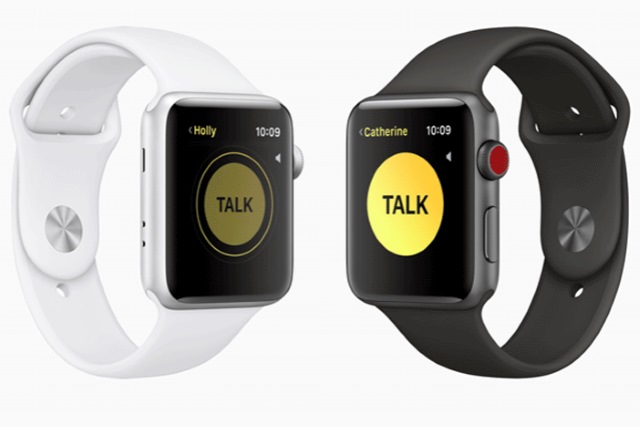 Apple Watch owners have a new operating system upgrade to look forward to -- watchOS 5. Revealed today at WWDC alongside iOS 12, watchOS 5 introduces a number of new features including a Walkie-Talkie app and a range of new workout-related options.

The update brings interactive notifications, improvements to Siri, and the ability to use an Apple Watch in place of a student ID card. Apple also revealed a new Pride Watch face which users can activate for free, and a Pride Edition Woven Nylon band which can be bought for $49.

Pitched heavily as a lifestyle and health device, it's little surprise that so many of the updates in watchOS 5 are related to fitness. It's now possible to start a fitness competition with other Apple Watch owners, and workout detection automatically determines when various activities start. Apple says that the feature "provides an alert to start the correct workout and gives retroactive credit".

The update sees the arrival of 12 new activities including hiking and yoga, and there are a host of running-related features as the company explains:

watchOS 5 delivers high-performance features for running enthusiasts, including a new cadence (steps per minute) metric for indoor and outdoor runs and walks, as well as a new pace alarm for outdoor runs that alerts users when they are behind or ahead of their designated target pace. A brand new metric -- rolling mile pace -- is introduced as an additional option for runners to see their pace for the immediately preceding mile in addition to their average pace or current pace.

The new Walkie-Talkie app does very much what you would expect, making it possible to voice chat with another Apple Watch owner by tapping your wrist. This new watch-to-watch connection mode works over both Wi-Fi and cellular.

watchOS also brings podcasts, and Apple says that a new feature for developers allows music, audiobooks and meditation sessions from apps such as Pandora, Audible and 10% Happier to be synced to Apple Watch for playback offline without the user's iPhone nearby.

Siri is now more intelligent and is better at making predictions and being proactive with suggestions. For students, Apple says:

With watchOS 5, Apple Watch replaces Student ID cards. With a raise of the wrist, students can gain access to places including the library, dorms and events, and pay for snacks, laundry and dinners around campus simply by adding their ID cards to Wallet on Apple Watch. The program launches with Duke, the University of Alabama and the University of Oklahoma this fall. Johns Hopkins University, Santa Clara University and Temple University will bring the capability by the end of the year.

When it launches in the fall, watchOS 5 will be available for Apple Watch Series 1 and later -- the original Apple Watch misses out.