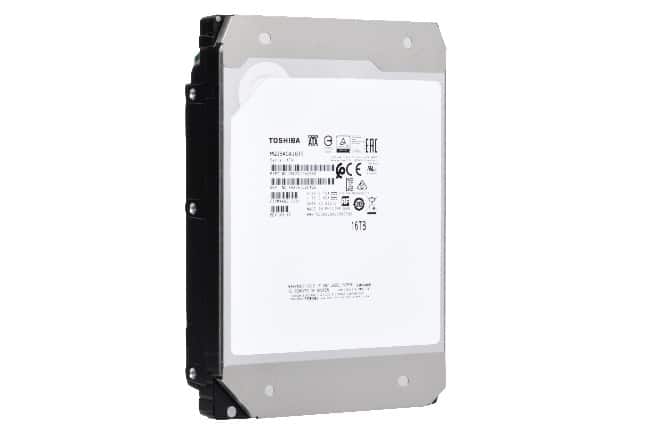 As consumers use less and less local storage because of the cloud and streaming media, you would expect manufacturers to stop focusing on massive hard disk drives. After all, solid state drives are faster, albeit much more expensive from a capacity standpoint. And yeah, long gone are the days where PC manufacturers touted massive local disk capacity as a selling point. But still, there is a need for cost effective hard drives for data centers, servers, and more. Hell, there are professionals -- such as media creators -- that can benefit from a roomy hard drive as well.

Thankfully, companies are still pushing the boundaries of what is possible with a 3.5-inch form factor. Toshiba, for instance -- with the help of helium -- has reached yet another milestone for its traditional hard drive portfolio. Its new MG08 drive is a 3.5-inch conventional magnetic recording hard disk drive with an impressive 7,200 RPM speed and a massive 16TB of storage capacity -- making 12TB, 14TB, and 15TB models look like "old hat."

"The MG08 Series is Toshiba's second-generation helium-sealed HDD family, and eighth-generation Enterprise Capacity HDD family. Toshiba has delivered its industry-leading 16TB capacity and improved power efficiency by utilizing the 9-disk helium design, introduced last year in 14TB models, and its own advanced precision laser welding process to ensure the helium remains sealed inside the drive case. The MG08 features 7,200rpm performance, a 550TB per year workload rating, a 2.5 million-hour MTTF, a 512Mib cache buffer, and a choice of SATA and SAS interfaces -- all in an industry-standard, 3.5-inch form factor," says Toshiba.

The company further says, "The MG08 Series further illustrates Toshiba’s commitment to advancing HDD design to meet the evolving needs for storage devices suited for use in cloud-scale servers and storage infrastructure. As data growth continues at an explosive pace, the industry-leading 16TB CMR capacity will help cloud-scale service providers and storage solutions designers to achieve higher storage densities for cloud, hybrid-cloud and on-premises rack-scale storage. With its improved power efficiency and 16TB capacity, the MG08 Series will help lower the TCO of storage infrastructure designed for applications such as data-protection, big data aggregation, content serving and digital archiving."

While some consumers will want this drive for their home PC or workstation, it really isn't intended for that. This drive and its massive capacity is intended for data centers, servers, and other such cases. With that said, it will surely make its way to some home users anyway. Unfortunately, pricing and availability is unknown at this time, although Toshiba will be sending drives to its larger business customers later this month for testing purposes.

Do you still utilize large capacity local storage, or are you mostly in the cloud  these days? Please tell me in the comments below.