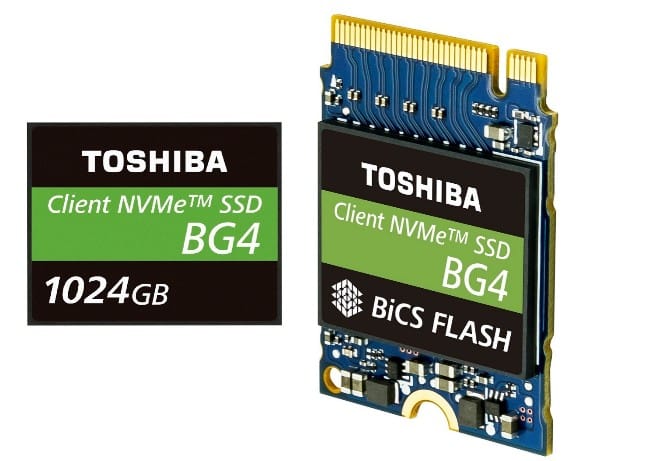 Today at CES 2019, Toshiba announced a new SSD series. Designed primarily for PC manufacturers, the "BG4," as it is called, is an NVMe SSD that features 96-layer 3D flash and up to 1TB capacity.

While the drive is not necessarily intended for consumers to buy directly, it will undoubtedly find its way to them through PC purchases. So yes, it is OK to be excited for it, folks -- especially since it is significantly faster than its predecessor, the BG3.

The company further says, "Additionally, the BG4 series improves upon the prior generation BG3 series in sequential and random write performance by approximately 70 percent and 90 percent respectively. Furthermore, power efficiency was improved up to 20 percent in read and 7 percent in write by utilizing Toshiba Memory's cutting-edge BiCS FLASHTM 3D flash memory and a new SSD controller."

As is typical for CES announcements, we don't know anything about pricing, and availability is a bit of as mystery as well. Toshiba simply says the SSD will be sold in Q2 of 2019, meaning April, May, or June -- an absolute eternity! What we do know definitively, however, is the capacity options -- 128GB, 256GB, 512GB, and 1,024GB. Computer manufacturers can opt for a solderable M.2 1620 or a removable M.2 2230.