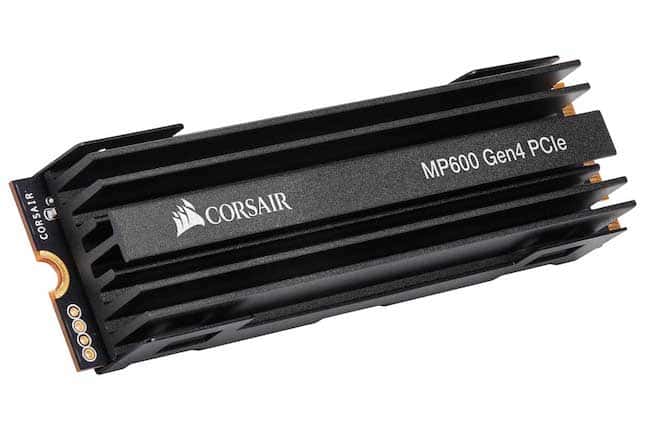 Storage drive speed has been greatly increasing over the past several years. It is remarkable to think how far we have come from slow mechanical hard drives thanks to the solid state drive revolution. We are at the point where SATA-based SSDs are considered "old hat" -- it is the faster NVMe PCI Express (PCIe) drives that are all the rage these days.

Earlier today, AMD unveiled its new third generation Ryzen 3 processors, and with them, the brand new X570 chipset for socket AM4. The exciting aspect of this new chipset generation is the addition of PCIe 4.0. The fourth generation of PCIe will be markedly faster than the prior gen, allowing even faster solid state drives. And yes, a company (CORSAIR) has already announced one (MP600).

"The MP600's phenomenal performance stems from the hugely increased bandwidth of PCIe 4.0 (PCI-Express Generation 4), a feature that will be made available to customers for the first time as part of the AMD X570 chipset and 3rd Generation AMD Ryzen Desktop Processors. Easily fitting into a PCIe 4.0 x4 M.2 slot, the MP600's NVMe interface and high-density 3D TLC NAND combine with a Phison PS5016-E16 controller to enable a new level of single-drive SSD performance. Boasting up to 4,950MB/s sequential read and 4,250MB/s sequential write speeds, the MP600 is ready to become the storage center of your new 3rd Gen AMD Ryzen Desktop Processor and AMD X570 chipset-based system," says CORSAIR.

Andy Paul, Founder and CEO of CORSAIR explains, "AMD is making huge strides in bringing new, high-performance features to the PC enthusiast market, and we’re delighted to be able to partner with them in doing so. With the MP600, AMD X570 motherboard owners will be able to experience the benefits of PCIe 4.0 immediately, with the fastest CORSAIR SSD yet at the center of their system."

While CORSAIR's new MP600 SSD promises to be insanely fast, we do not know much beyond speed. For instance, we do not know the capacities, nor do we know pricing. Hell, we do not even know when this drive will be available for purchase. What we do know for sure, however, is that heatsink looks damn pretty, and enthusiasts should be very excited about PCIe 4.0.