Nebra AnyBeam: A Raspberry Pi powered home cinema projector you can fit in your pocket [Review] 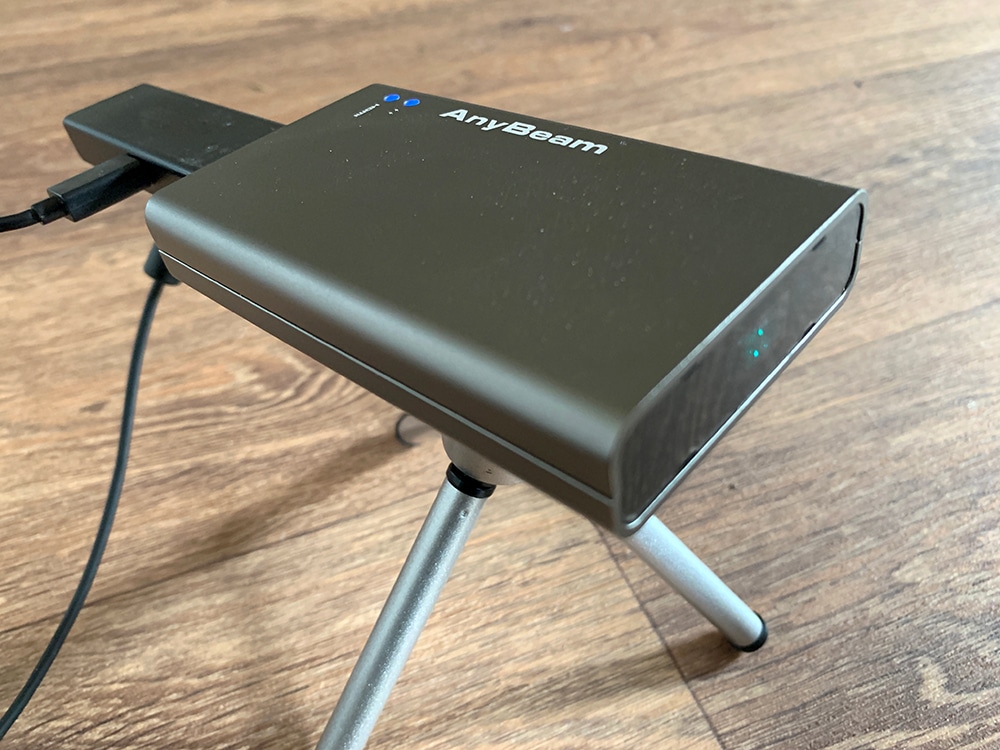 Before large screen televisions and 4K content became a thing, I used to enjoy watching films projected onto a white wall at home. I had a Canon projector hooked up to my PC with surround sound, and it was like having a personal cinema.

Technology has moved on quite some way since then, and you can now buy reasonable quality projectors for a fraction of the price. Case in point is Nebra AnyBeam, a Raspberry Pi powered pocket sized projector.

For this review, I tested the Nebra AnyBeam. It’s a tiny device a little thinner than a pack of cards (103 x 50 x 19mm) that’s surprisingly light (133g). There’s a standard 1/4-20 UNC tripod mount on the underside, and on the opposite side to the lens you'll find a MicroUSB slot for power, a 1.4 HDMI connector, and a 3.5mm audio jack.

On the left hand side is a spring-loaded multiway switch for interacting with the menu, and a 1 watt speaker.

It’s very easy to get set up with it. Plug in the power and it will begin projecting a "No signal found" message. It uses a MEMS laser module for projecting, so the size of the display is adjusted simply by moving the projector nearer or further away from the screen/wall you’re aiming it at and there’s no focusing required.

You attach your media source to the HDMI connector. This can be a set top box, Amazon Fire TV Stick or Chromecast, or -- if you have the relevant cable -- a phone/tablet or  PC/Mac.

I used a powerbank with two USB-A ports to power both the projector and a Fire TV Stick, so there were no trailing wires to worry about, and after a brief wait Amazon Prime appeared on screen.

Holding down the button on the left side of the projector lets you interact with the menu and you can use it to adjust key-stoning, flip the image, tweak brightness and sharpness, and configure the Green and Blue Alignment. You can also change the language here, and perform a factory reset if needed.

The device comes with a 1-watt speaker, so you can hear what’s going on without needing to attach an external sound source. Because the projector uses a laser module the device doesn’t run hot, so there's no whirring fan for the speaker to try and compete with. That said, the sound output obviously isn't good enough for watching TV shows or movies.

The projection is a little bit grainy, especially up close, and you really need to use it in a very dark room as the picture is quite washed out otherwise, but it’s lightweight, ultra-portable, and should suit most people’s needs well. Sure, it’s not going to compete with top of the line projectors, but then at just $243.27 you wouldn’t expect it to.

I’d like to have seen an SD card or USB port included for media playback, and 1080p would be my preferred resolution, but even so I'd definitely recommend it.

The four different versions of AnyBeam are available to pre-order from Pi Supply with worldwide shipping. Estimated delivery is August 2019.