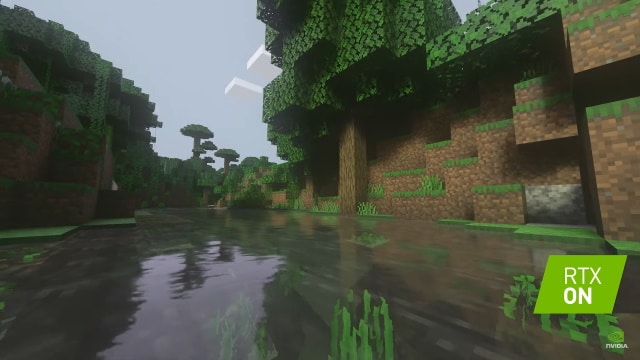 Microsoft may have canceled the Super Duper Graphics Pack update for Minecraft, but the blocky game is still due for a graphical improvement... for some people, at least.

At Gamescon in Germany today, Nvidia and Microsoft announced that a real-time ray tracing technique called path tracing will be coming to the Windows 10 version of Minecraft -- but only for systems with NVIDIA GeForce RTX GPUs. The graphic improvements will give Minecrafters better lighting, colors and shadows, and will be delivered by a free update to the game.

Improving the visuals of a deliberately graphically simple game such as Minecraft might seem like a bit of a strange idea, but Microsoft and Nvidia are running with it. Nvidia says that "Minecraft with RTX will refit the entire game with path tracing, a form of ray tracing featuring incredible levels of detail, affecting almost every pixel of every scene. You'll see lifelike lighting, reflections and shadows, plus so much more, exemplifying the power of ray tracing and demonstrating why game developers like Mojang and Microsoft are working together with NVIDIA to enhance upcoming blockbusters with ray tracing".

In a statement, the franchise creative director of Minecraft at Microsoft, Saxs Persson, said:

Ray tracing sits at the center of what we think is next for Minecraft. GeForce RTX gives the Minecraft world a brand-new feel to it. In normal Minecraft, a block of gold just appears yellow, but with ray tracing turned on, you really get to see the specular highlight, you get to see the reflection, you can even see a mob reflected in it.

Other improvements you can expect to see include:

Nvidia shares a video that shows off the new ray tracing technique:

You can expect to see the update some time in 2020, but no specific date has yet been provided.