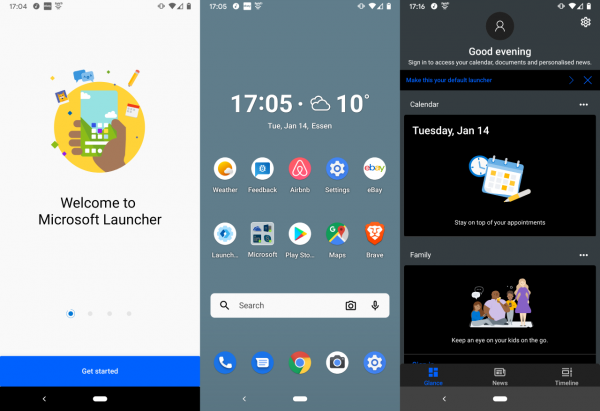 Microsoft Launcher, formerly known as Arrow Launcher, is a popular Android application by Microsoft that Android users may install on their devices to replace the default system launcher. It is quite popular with Android users and updated regularly.

To test upcoming features, Microsoft has just released Microsoft Launcher Preview in early access. It is a development version that users may install to try out new functionality. Microsoft gets feedback and some data in return which helps development.

Be among the first to help us test brand-new early-stage features as we build an improved version of Microsoft Launcher. The goal of this program is to gain your valuable feedback to improve quality, performance and shape the overall user experience. Give it a try and use the feedback button in the app to let us know what you think. We will have frequent updates to this launcher so check back regularly.

The new Microsoft Launcher Preview "has been rebuilt on a new code basis" to make features such as dark mode, landscape mode, or performance improvements possible, according to Microsoft.

Existing users of Microsoft Launcher should note that the preview release supports only some of the features of the stable edition at the time. Additionally, Microsoft notes that users should consider this alpha software and expect that some "features may not work properly" or that the "experience may be unstable".

Android users who prefer to install Stable applications can take a look at the stable Microsoft Launcher version instead.