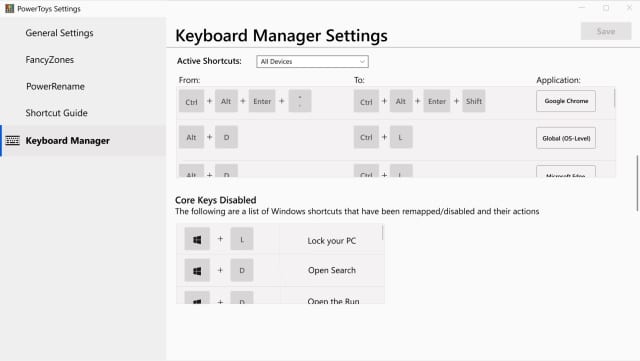 Microsoft's PowerToys utilities have always proved popular, and the arrival of a Windows 10 version was met with huge excitement. New utilities have been released over the last few months, and now there is news of a new addition: Keyboard Shortcut Manager.

Despite the name, Keyboard Shortcut Manager does much more than give you control over keyboard shortcuts. On top of this, the PowerToy can be used to remap keys -- something that will be welcomed by power users, developers and people switching from macOS or Linux to Windows.

At the moment, Keyboard Shortcut Manager is still in development, and it's not quite clear when there will be a version to download. But judging by how quickly the existing PowerToys have moved from embryonic ideas into fully fledged products, it shouldn't be too long before an installable version appears. When it does, it could be known simply as Keyboard Manager.

So what can you expect from this particular PowerToy?

In the words of developer Sakariya Ahmed, Keyboard Shortcut Manager lets users "gain access to the keyboards' potential with the ability to remap keys and create user-defined keyboard shortcuts". The author has already prepared a tweet to promote the PowerToy when it is released:

Ever wish you could change some shortcuts and edit keyboard buttons? Or switch computers and your keyboard was slightly different? PowerToys is here to solve all your keyboard woes with a Keyboard Shortcut Manager! Customize your experience by remapping keys or creating new shortcuts!

Keyboard Shortcut Manager will compete with various existing keyboard shortcut tools and keyboard remappers, such as AutoHotKey and Karabiner. One of the key advantages of the PowerToy is that it will enable users to tweak OS-level shortcuts to suit the way they work -- so it will be possible to change the shortcut to access the Run dialog from Windows + R to Windows + Z if you want. It will also be possible to disable OS-level shortcuts you don't use to avoid activating them by accident.

You can find out more on the Keyboard Shortcut Manager GitHub page.