When I first saw the Kanguru Defender Bio-Elite30 flash drive, I was immediately intrigued. Having the ability to decrypt an encrypted flash drive with the touch of a finger was immensely convenient. And yes, convenience matters, as making encryption easy increases the likelihood that the user will actually use it. If encrypting files becomes too cumbersome, the user may not bother, leading to poor security practices.

Also cool was Kanguru's promise that it was operating system agnostic, meaning it would work with any OS, such as Windows, macOS, and desktop Linux distributions. I'd later find out that was only partially true, but more on that in a moment. It is even well-built -- the housing is a solid piece of aluminum that not only looks beautiful, but should lend to increased durability.

So, is the drive truly operating system agnostic? In use, yes, but in set up, no. You see, to set up the drive, you must have a Windows or Mac computer. You simply cannot set up the biometrics and register your fingerprint with Linux. This meant that in order to use it with my Linux computer, I had to first plug it into my Windows 10 PC and set it up.

The drive is initially detected as a faux DVD drive containing the set up files, and while a Linux distribution can see the files, nothing can be done with them. In Windows, the process was very easy and straightforward -- I was ready to go in minutes. If you have ever registered your fingerprint with an Android device or iPhone, it is very similar -- continually touch and then lift your finger -- tapa tapa tapa.

It was a bit deflating that I couldn't do it all in Linux. Oh well. Not the end of the world. If you don't have a Windows PC or dual-boot system, you can borrow a friend's computer I'm sure. Friendless? You can probably go to a local Staples, Best Buy, or Walmart and "borrow" a display model for a few minutes. Years ago, I would regularly use the Best Buy iMac computers to jailbreak my iPad, but I digress. 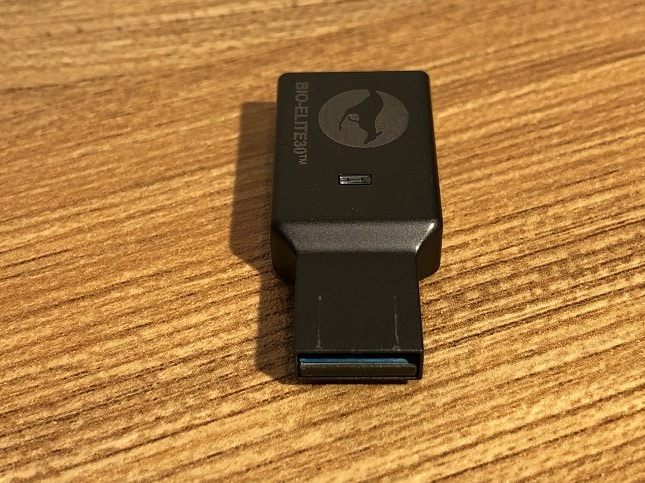 Now that it was set up, I could plug the Bio-Elite30 into any computer/device with a USB-A port, press my index finger to the reader, and decrypt it. Yes, it works with all Linux-based operating systems, including Chrome OS. The LED flashes a beautiful blue when your fingerprint is accepted, and green when rejected. And for the most part, it almost always recognizes my fingerprint. I'd say about 75 percent of the time, it unlocks on the first try. But yeah, about 25 percent of the time it denies me. Annoying? A bit, but this is not such a terrible thing -- you won't be decrypting the drive all day long like with a smartphone. 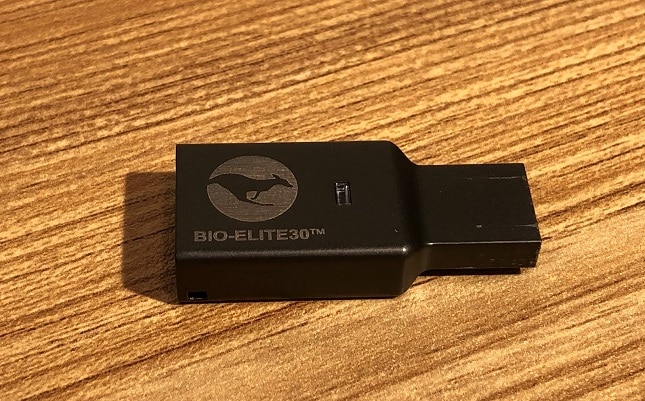 In my testing, saving, copying, and moving files worked flawlessly, although it is not the fastest USB flash drive I have used. I wouldn't call it slow, per se, but there are much faster drives on the market. On average, I got read speeds around 85MBps and write speeds of 65MBps.

Bottom line, the Kanguru Defender Bio-Elite30 does everything it claims, although it was a bit disappointing that I couldn't do the set up with Linux. Speaking of Linux though, I began to wonder if I could use the Kanguru Defender Bio-Elite30 as installation media for installing a Linux distro. And so, I decrypted it with my finger and wrote the MX Linux 19.1 ISO to it. Then, I removed it and plugged it into a different computer, and as that machine was booting, I held my finger on the fingerprint reader. I am happy to say, it decrypted fast enough for the bios to detect the bootloader and load the MX Linux installer. If I didn't hold my finger to it, it could not be booted into.

This got me thinking though. Where could it be useful to have a live Linux distribution that can only be booted after decrypting with a fingerprint? Tails! I don't know why I didn't think of this sooner, but Tails runs from a flash drive and is designed to help protect the user's privacy. That OS is particularly helpful for journalists or those living under an oppressive government that doesn't offer freedom of speech. Hell, in some countries, just having such a flash drive could be illegal. And so, having the drive encrypted and the contents invisible without decryption is a godsend. 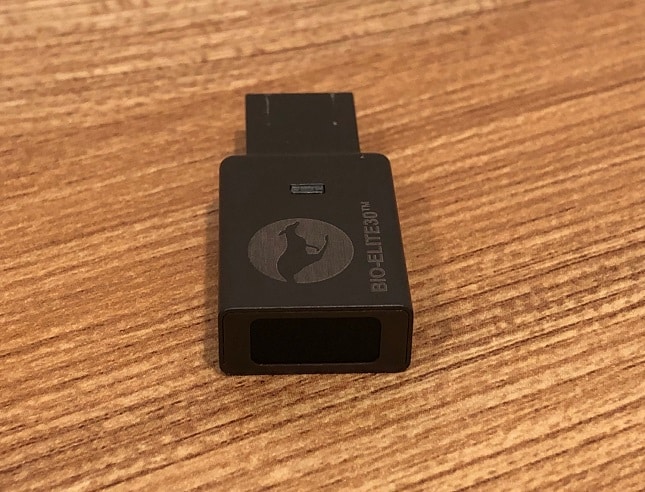 As I expected, this went wonderfully. I again decrypted the drive, but this time, I wrote the Tails image file to the Bio-Elite30. I then plugged it into a computer and didn't touch my finger to the reader. Guess what? The drive was not bootable. Next, I rebooted the computer and decrypted it immediately with my finger. This time, Tails was recognized and booted right up! It is almost like the Bio-Elite30 was designed for Tails -- it is a match made in heaven.

Do I recommend the Kanguru Defender Bio-Elite30 fingerprint encrypted flash drive? Absolutely. True, it is disappointing that the initial set up cannot be done on Linux, but as long as you can temporarily borrow someone's Windows PC or Mac, that shouldn't be a deal-breaker. The Tails aspect is wonderful, making an already privacy-focused operating system even more secure. I do wish that the drive was a bit faster though.

If you want to buy your own, it can be had using the below links in your choice of three capacities -- 16GB, 32GB, and 64GB. We used the 16GB variant in this review.