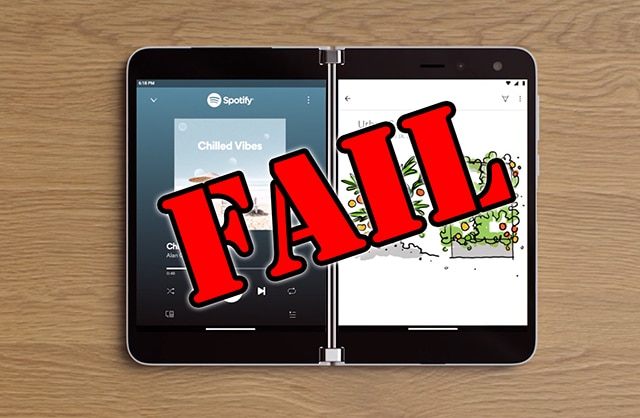 Microsoft is a wildly successful company, and when it comes to desktop computing, no one comes close to competing. Whether a computer is for home, education, or business, Windows is probably powering the experience. And yet, when it comes to mobile, Microsoft is a huge failure. The company got a head-start with Windows Mobile pre-dating the iPhone, but it squandered that lead with terrible products such as Kin, Windows Phone, and Windows 10 Mobile.

Microsoft finally admitted defeat by killing Windows 10 Mobile. Ultimately, the company embraced Android by bringing its own launcher to Google's Linux-based operating system. Today, Microsoft launches its first-ever Android device. Called Surface Duo, it copies the dual-screen concept pioneered by LG. Sadly, the smartphone appears to be a train wreck. Here are just five reasons why you should not buy it.

1.) Let's start with the price -- $1,400. No, that is not a typo. Microsoft actually expects people to spend that much on an unproven phone. True, other manufacturers, such as Samsung, are asking that much for some phones, but Samsung has a long history of manufacturing Android smartphones. Microsoft has not yet earned its place as a premium phone-maker that can charge such prices. Quite frankly, its Windows-powered Surface devices have a long history of being buggy too.

2.) Despite that high price, Surface Duo does not have 5G. This is simply inexcusable for such an expensive device. The $349 Pixel 4a doesn't have 5G, but that is OK as it is a budget phone. If I am going to lay out $1,400, it had better have the latest cellular standard. After all, you may end up using it for several years. 5G is becoming more common every day, and it is a shame that Microsoft dropped the ball.

3.) Those ugly bezels. Holy cow, how can Microsoft release a device in 2020 with such giant and unsightly bezels? The large black frame around the screen makes it look dated on day one. Some people will say the bezels are purposeful -- a place to hold the phone without touching the screen. I say, it is just poor design.

4.) Believe it or not, Surface Duo does not have NFC. What does this mean? It cannot be used for wireless payment services such as Google Pay. This omission is laughable, as we are currently in a pandemic where wireless pay is a great way to avoid germs. What the hell was Microsoft thinking?

5.) The stylus is sold separately! Wow, talk about gouging customers. Microsoft touts the note-taking capabilities of the Surface Duo, but at 1,400 bucks, the company can't even toss in the damn pen! Samsung's Note devices come with the S-Pen, so why can't the Surface Duo?

Do you agree with these 5 Surface Duo shortcomings? Will any of them cause you not to buy the dual-screen Android phone? Please tell me in the comments below.