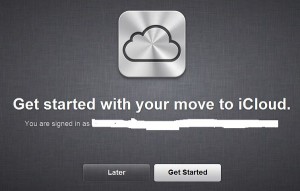 Early this afternoon, Apple flipped the switch making iCloud and its next-version mobile operating system broadly available. To use one you'll need the other, and for Mac owners that also means OS X 10.7.2. If you didn't get iTunes 10.5 yesterday, you'll need it, too.

In many respects, the big news from Apple this week isn't iPhone 4S, no matter how long the buying lines might be come Friday, but iCloud and iOS 5. As I contended earlier today: "iCloud is Apple's killer app". iCloud is a synchronization service that pushes email, contacts and calendars -- like predecessor MobileMe -- and offers online data storage. But there's much more, such as synchronization of applications or digital content like music and movies purchased from the App Store across devices. It's unsurprising that Apple would take a sync-across devices approach. After all, the company generates most of its revenue from selling hardware, not offering cloud services.

To date, Google has been the sync leader, but with as much pull as push. For example, to stream content from Google Music, users must upload it first. By comparison, Apple's cloud scans the computer and then makes content available to all supported-iOS devices. The service is free for content purchased from Apple, but the forthcoming iTunes Match includes all your music -- for a $24.95 yearly fee.

iCloud offers 5GB of storage for free, and users have the option of buying more. Existing MobileMe customers like me must migrate to iCloud -- and that means upgrading to iOS 5 on devices and OS X 10.7.2 on Macs first. Windows users just need Vista or later and Outlook.

The new mobile operating system is nearly as significant as iCloud, and users will need one to get the benefits of the other. Apple claims that iOS 5 packs more than 200 new features. Among the notable ones:

To get iOS 5, Mac users should upgrade to OS X 10.7.2 and iTunes 10.5 -- Windows users just the music software. Plugging in the iOS device launches iTunes and prompts to download and upgrade to v5. FileForm download page: iPhone 4 GSM; iPhone 4 CDMA; iPad 2 GSM. iCloud is accessible from the web and OS X 10.7.2 from Mac Software Update.