Microsoft to Apple and Google: 'Bring out your dead!' 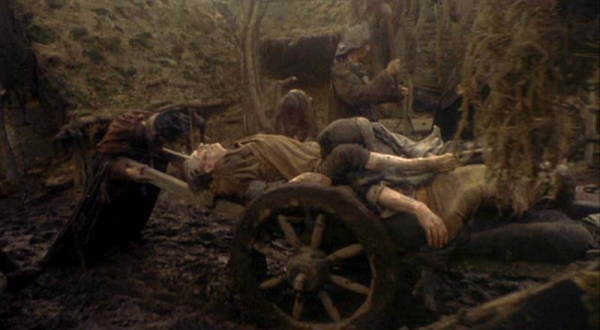 Classic comedy "Monty Python and the Holy Grail" opens with a body collector calling: "bring out your dead!" "Here's one", replies a man carrying a geezer, who pipes in: "I'm not dead". Major Microsoft competitors -- Apple, Google and their supporters, for example -- have repeatedly tried to give up Microsoft for dead. But today's major Xbox updates clearly proclaim Microsoft isn't dead, or even dying. The Redmond, Wash.-based giant has repositioned the console and supporting cloud services as a whole entertainment package -- more than just about gaming.

If any dead deserve to be brought out, they are Apple and Google. Xbox 360 and Live trailblaze where rumor whores claim Apple TV and Google TV will go. It's pathetic that bloggers and journalists spread rumors about Apple's future TV plans -- the newest about a television coming in three sizes -- a year from now! How the frak could anyone possibly know? Instead of what might be, how about writers focus on what is? Some commenters accuse me of linkbaiting. Apple future product rumors are real prime examples. You won't read them from me.

Microsoft leverages some of its best assets with today's updates -- developer and content provider relationships, its existing cloud services, Kinect, voice commands (derived from TellMe), Bing and Mediaroom. The latter is hugely important to turning Xbox into a TV set-top box.

Apple and Google software power cheap streaming shells. Mediaroom lights up major IPTV services. It's no coincidence that in the United States, AT&T and Verizon, which use Microsoft software, are Xbox entertainment partners. Apple and Google TV have got what? I can't even use Hulu Plus on my Sony Google TV. Xbox has got it -- since May. AT&T U-verse offers more content via Xbox Live. I've got U-verse (since February 2008) but not Xbox 360/Live.

"Today, we have more than 57 million Xbox 360 consoles in homes across the world, and more than 35 million of those are connected to Xbox Live, a service which sees its members log cumulatively 2.1 billion hours a month", Marc Whitten, Xbox Live corporate veep, observes. From that install base, Microsoft will court not just game developers but those creating apps, too -- the latter a strategy underway but planned to accelerate.

Metro. The new dashboard takes on attributes of the tile-like, task-oriented user interface on Windows Phone and coming to Windows 8. For years, Microsoft has talked, but not delivered, on a three screen -- smartphone, PC, TV -- strategy. User interface unification across the three screens is hugely important to achieving Microsoft's broader software-and-services goal. Whether or not the motif actual works on a big screen is to be answered by you and any other Xbox 360 users. I'm skeptical but haven't had opportunity to try out.

Gaming to go. Xbox Live leverages Microsoft cloud services to save games, making them portable. Play at home or save and play at a friend's house.

Bing. As I learned from using Google TV, search transforms the viewing experience. Microsoft has copied Google a little, but it's a natural evolution.

NUI. Voice search is one of many NUI capabilities coming with today's updates, which Microsoft says are the start of many entertainment-oriented ones. Kinect gets new capabilities, controlling content services among them. U-verse has been available on Xbox since holiday 2010. Kinect becomes part of the experience with the new updates.

"Enabling U-verse TV customers to use voice and gesture controls to manage their TV experience will unleash a new wave of interaction with our service", Jeff Weber, AT&T Mobility and Consumer Markets vice president, says. "Xbox is a key part of AT&T's multi-screen strategy for TV entertainment, and our work with Microsoft to take full advantage of Kinect in the living room will bring more personalization, more control, and an even better TV experience to homes across the country".

Beacons. Xbox/Live will notify gamers when their friends are ready to play. It's kind of a copy-cat feature. A Nintendo Wii light flashes when there are messages from friends, like being online and ready to play.

On-demand TV. What really distinguishes Xbox 360/Live from Apple TV or Google TV: New content streaming partners, which are global. Among those available today include, according to Microsoft: EPIX, ESPN and Sky Go (in Germany). Coming later this month:

Apple TV and Google TV have got what? Microsoft today made its strongest push to turn Xbox into the most important entertainment console in the living room. Even if Microsoft fails at that lofty goal, Apple and Google have got nothing that competes for breadth of content or entertainment capabilities. Android, iOS, "bring out your dead!"

95 Responses to Microsoft to Apple and Google: 'Bring out your dead!'