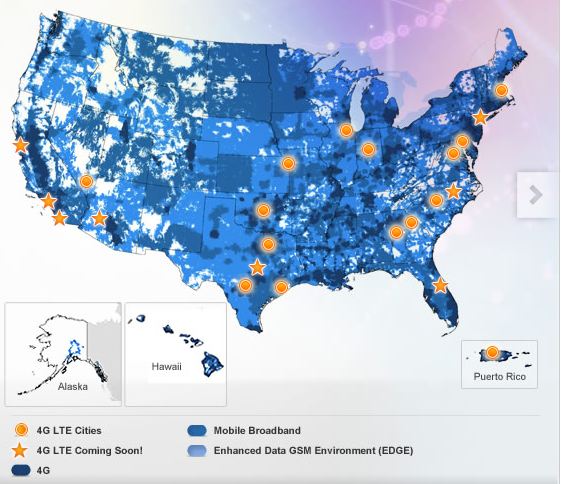 Days before Apple announced iPhone 4S, I asked: "What if iPhone 5 isn't LTE?" There is no true 4G iPhone, which apparently isn't stopping buyers. Yesterday Verizon -- the carrier with broadest LTE network and most number of supporting handsets -- revealed 4.2 million iPhones sold during fourth quarter.

Circling back to LTE here in San Diego, last week I wrote about sudden battery problems with Skyrocket, apparently related to network acquisition problems. I suspected that the phone burns through the battery trying to connect to AT&T's cellular network. An AT&T technician confirmed an acquisition problem, but attributed it to the antenna. I wasn't convinced, particularly since AT&T will only swap the fairly new Skyrocket for a refurbished one.

I discussed the situation with my wife and asked her to sit tight, thinking the problem might resolve itself. I had seen this before. In late Spring 2010, battery life went to hell on all our AT&T phones, and I determined it was a problem connecting to the local cellular towers. About 30 days later, battery life on all phones returned to normal and we stopped having dropped calls. AT&T had been updating the network in advance of iPhone 4's release.

AT&T had indicated LTE would soon come to San Diego, and I wondered if a network upgrade could cause the problem. Three days ago, Skyrocket went from 8-10 hours battery life, even when idle, to more than 24. It's nowhere as good as when I bought the phone in early November but more than acceptable. My wife is out as I write, or I'd check to see if she's connected to LTE. But that's what I expect, and I am looking forward to speed comparisons. Best speed test so far on Verizon, about two blocks from my apartment: 27Mbps. Can AT&T do better? I actually expect it will. But, so far, Galaxy Nexus, which is always connected to LTE, has exceptional battery life. Galaxy S II Skyrocket won't easily compete.