Sorry Europe, no music, magazines or TV shows for your Nexus 7 (yet) 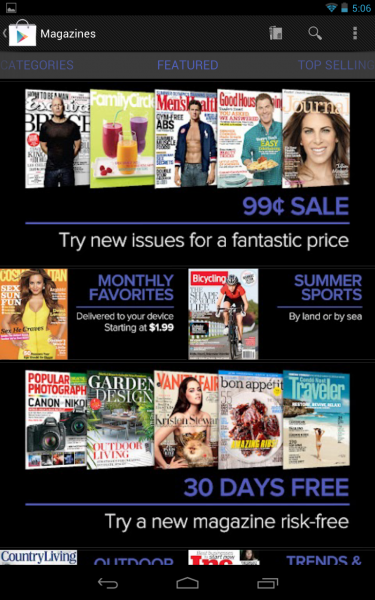 Google's Nexus 7 tablet made quite an impact at the I/O developer conference last week. The tablet is powered by Google's Android 4.1 operating system, a quad-core Nvidia Tegra 3 processor, and either 8GB or 16GB of storage.

What makes the tablet interesting to a lot of people is not the fact that it is running Android 4.1, nor the hardware that it ships with, but the combination of what it packs and the price that Google is charging for it. But something is missing -- that is for people living on the Continent. That combination, the package, is missing something.

The $199 that the 8GB version retails for is the same price that Amazon charges for its Kindle Fire tablet, and $50 less than Samsung is charging for its Galaxy Tab 2 tablet. But the Nexus 7, however, ships with a faster processor and the new Android version, which the other two do not. Joe Wilcox does not call it a Kindle Killer without reason, and his first impression of the Nexus tablet is outright positive.

One of the things that Google promoted heavily during the conference was that Nexus tablet owners would get access to Google Play, the company's online store, to download movies and TV shows, music, apps, books and magazines to the Nexus 7. And while that is certainly a possibility for owners in the United States, the experience may be limited for tablet users in other countries.

The Nexus 7 will, for instance, be available in the United Kingdom later this month for £159, which is roughly the price the 16GB version of the tablet retails for in the United States. That's actually a better price than many European users expected, as it is often the case that companies only change the currency symbol, which makes many goods produced in the United States are more expensive in Europe.

Nexus 7 owners from the United Kingdom will face limitations when it comes to accessible features in the Google Play Store. The Inquirer reports that the UK version will not feature magazines, TV shows or music at launch. This limits the choice to movies, apps, games and books.

People from the UK may not even realize that they are not receiving full service in the store, as both the UK store page and the Nexus tablet website don't reveal that they are missing out on features. Those who have followed I/O or the coverage here on BetaNews may, however, be disappointed that they do not get access to all features that Google promoted heavily during the conference.

The Nexus tablet website, for instance, highlights that users can "explore over 600,000 apps and games, the world's largest collection of Ebooks, and thousands of movies", without mentioning magazines, music or TV shows at all.

A Google spokesperson told The Inquirer that international licensing requirements prevent the company from offering those features in the UK.

Do you think that Google's Nexus 7 tablet will be less successful in countries where store offerings are limited? What's your take on this? Will content limitations affect your purchase decision?

7 Responses to Sorry Europe, no music, magazines or TV shows for your Nexus 7 (yet)