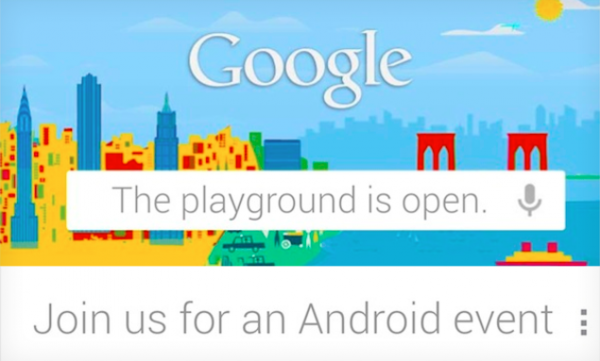 Could the end of October be any more jam-packed? October 29, same day Microsoft launches Windows Phone 8 in San Francisco, Google will hold an event in New York for Android -- presumably for the next Nexus device(s), just about the worst kept tech secret(s) of the month. Microsoft just can't catch a break. This week, Apple sent out media invites for an October 23 shindig, possibly for iPad mini, coming three days before Microsoft launches Windows 8 and Surface tablets.

Yeah, it's a tough month to be Microsoft -- what, with the company's future hanging on the three products and post-PC, connected-device era stumpers Apple and Google looking to dampen Windows' big days. But what a month for gadget geeks -- and the October 26 and 29 events coming on my three sisters' birthdays (twins, in case three on two days puzzles you): Android devices, iPad mini, Surface, Windows 8, RT and Phone. And, hey, what about some of those new smartphones, like LG Optimus G?

Google sent out invites to "The playground is already open...Android event" late evening yesterday. I didn't receive one, and must thank Boy Genius Report from which I, ah, borrowed the above graphic. There's meanness behind the timing, with Google, like Apple, stomping on Microsoft's grave long before Windows is dead and buried. There's plenty of breath in the lungs, but you may hear otherwise with bloggers and reporters distracted by post-PC darlings Apple and Google. Need I chronicle exactly how many rumor stories posted this month about iPad mini or new Nexus devices? Make them stop. Please!

I actually feel sorry for Microsoft. The company already has started the ad blitz for Windows 8 and Surface and surely will spend hundreds of millions (billions if you believe the rumors) to promote the new stuff. But bloggers, reporters and other writers are part of that marketing effort, and they will be distracted. Sharks smell blood in the water.

Microsoft needs the launches to be big. PC shipments collapsed during third quarter, in part as smartphones and tablets sap sales. Global PC shipments fell 8.6 percent year over year, according to IDC, surpassing the minus 3.8 percent forecast. Gartner's estimate is a more generous 8.3 percent decline. The United States, a region recently in love with tablets, is in free fall, with shipments down 13.8 percent by Gartner's reckoning and 12.4 percent according to IDC. For the better part of a year, analysts excused declining PC shipments as market anticipation for Windows 8. But the slowdown during back-to-school buying season foreshadows weakness ahead. iPad mini stands to undermine Windows PCs' fourth-quarter recovery.

Windows Phone's situation is dire, to say the least. Combined Windows Mobile and Phone OS share in the strongest cellular mobile market, the United States, is just 3.6 percent on smartphones, according to comScore. That compares to 52.6 percent for Android and 34.3 percent for iOS. Still, there's a glimmer of hope. During second quarter, based on global handset sales, Microsoft mobile OS share rose to 2.7 percent from 1.6 percent a year earlier, according to Gartner. Third-quarter data isn't yet available.

Elephant in the Room

By comparison, Android smokes all other platforms combined. Global market share reached 64.1 percent in Q2, up from 43.4 percent a year earlier, according to Gartner. This summer, cumulative Android device shipments (mostly phones) reached 500 million, surpassing iOS for the first time (400 million). IHS iSuppli predicts that cumulative Android smartphone shipments will reach 1 billion next year -- 2015 for iOS to reach the same number. Currently Android activations now total 1.3 million, up from 900,000 in June, according to Google.

The point: Android is a really big elephant in the room, and Google capitalizes on geography. Those journalists flying into New York for the Windows 8 launch could spend a couple extra days there and attend Google's shingdig (I would if going).

As for what to expect from Google, the prevalent rumor is multiple Nexus devices from different manufacturers, which would be smart. Under the scheme, as rumored, manufacturers would adhere to specific guidelines that, if nothing else, ensure immediate updates to the newest Android versions. Key benefits:

In business, there's no such thing as fair play, and Microsoft won't get any this month from Apple or Google. Say, Steve Ballmer, will you return the favor, or what?