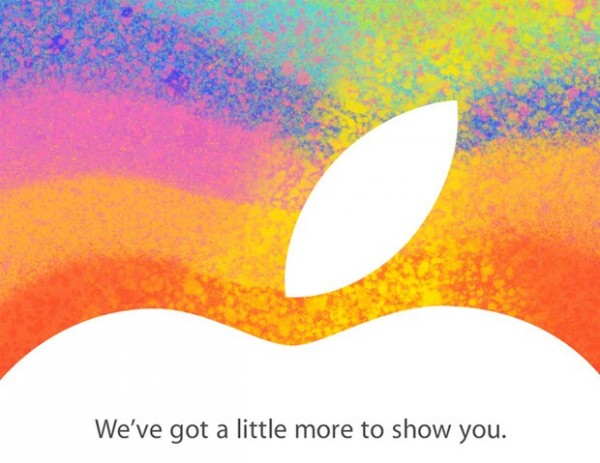 The invitations are out, and rumors proved true. Apple will hold a special press event, presumably for iPad mini, on October 23 -- that's three days before Microsoft launches Windows 8 and Surface tablets. Talk about party crashing. Apple almost surely will steal much of its rival's thunder, splitting media coverage and assuring that most every Windows 8 or Surface blog post or news story will mention Apple and iPad mini.

Anyone who thinks the timing isn't deliberate lives in lala land. Capitalism is all about brutal competition, and if iPad mini debuts next week Apple will heap hot coals through Microsoft's Windows and onto its shiny Surface. InterWeb writers have obsessed about the rumored tablet for weeks. Its arrival will be almost as blah blah worthy as Steve Jobs returning from the dead.

Pricing is anyone's guess, but $249 leads the rumormill. Such price would also smack Google's Nexus 7 aside the screen and press Amazon's Kindle HD 8.9" models, which go on sale next month. Those tablets start at $199 and $299, respectively. Then there is Surface RT, which pricing Microsoft announced today. The tablet starts at $499, comparable to new iPad, but that may be $250 too much at launch. Granted, Surface has larger display but it's also new to a market category iPad dominates. I'll be curious to see if just Apple's event announcement stalls Surface RT pre-orders, which started at Noon EDT today.

The PC market is in crisis. Windows 8, RT and Surface really represent Microsoft's last stand, as the company seeks to preserve, and even extend, the PC's relevance -- even as more people buy cloud-connected devices like iPad first. During third quarter, global PC shipments fell 8.6 percent year over year, according to IDC, surpassing the minus 3.8 percent forecast. Gartner: 8.3 percent decline. The United States, a region recently in love with tablets, is in free fall, with shipments down 13.8 percent by Gartner's reckoning and 12.4 percent according to IDC.

Looking at the year's sales to date, and signs Windows 8 may not give enough lift, Craig Stice, IHS senior principal analyst, warns: "All this is setting the PC market up for its first annual decline since the dot-com bust year of 2001".

Against this post-PC backdrop comes iPad mini, which rumored existence has dominated tech news for weeks. That said, while hype surely will soar, sales are anyone's guess. You can assume big predictions from the Apple Fan Club of bloggers, financial analysts and reporters. But an August TechBargains.com survey of 1,332 shoppers, raises concerns: 50 percent of respondents said they wouldn't buy iPad mini. Something else more important: Apple risks splitting its buying base. I think Apple will bring the smaller tablet to market too soon -- long before exhausting the sales potential at $499 and above.

A 7-inch or 8-inch iPad doesn't fit right in the lexicon of Apple mobiles. iPhone 5, with its 4-inch screen, ranges in price from $199 to $399, while iPad goes from $499 to $829. Surely Apple wouldn't price the device much lower than $299, and $199 or less is where the device needs to be given Amazon Kindle Fire HD and Google Nexus 7. But even at $299, and more so $249, iPad mini risks cannibalizing larger Apple tablet sales, which the company has far from exhausted.

From that perspective, CEO Tim Cook and other Apple executives either see slowing sales of larger iPad or necessity to put market share before margins. Every iPad mini sale this Christmas likely takes away from something else, whether competing tablet, Windows PC, Mac or new iPad.

1. Windows 8, RT and Surface. Popular wisdom is that Microsoft and OEM partners can jump start the new products leveraging the already mature ecosystem and large customer base. But, as previously mentioned, PC sales are super slow, presenting vulnerability to something else. Most major analyst firms concede that cloud-connected devices already steal PC sales. Smaller, lower-cost iPad, at $249 (if rumors are true), would be easy purchase for many people this holiday season.

2. Android tablets. In the United States, something quite dramatic occurred during 12 months. In August 2011, Apple had overwhelming tablet share -- 81 percent. But a year later, iPad share had dropped to 52 percent share, with Android tablets rising to 48 percent from 15 percent. Thirty-two percent of tablet owners purchased in 2012. Twenty-five percent of Americans regularly use a tablet -- 22 percent owners, 3 percent sharing another in the household. iPad mini is chance to regain share, particularly in the price range where tablets like Kindle Fire HD and Nexus 7 compete.

3. Platform competiton. Apple's iOS may rule tablets, but Android overwhelmingly leads all cloud-connected devices. This summer, cumulative Android device sales pushed ahead of iOS for the first time -- 500 million to 400 million. Daily Android activations now total 1.3 million, up from 900,000 in June, according to Google. At that run rate, Android device sales, based on activations, work out to 117 million every 90 days. IHS iSuppli predicts that cumulative Android smartphone shipments will reach 1 billion next year, but not until 2015 for iOS. If Apple can't grow the platform faster via handsets, tablets open another route. Remember, the best apps typically appear where developers can usually make the most money -- and larger number of users matters.

Whatever Apple's motivations, and assuming iPad mini does debut next week, consumers will have some good computing device choices for holiday 2012 -- whether PC, smartphone or tablet.