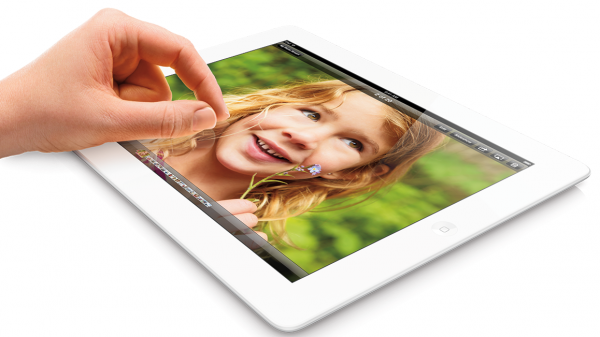 Yesterday morning, when I rolled out of bed (West Coast time) and saw colleague Wayne Williams' headline on 128GB iPad, I thought: "Well, good for Apple! This should bring down the price and raise storage capacity of other models". But the details wiped away all enthusiasm. This thing sells for as much as $929. What the frak? Who will pay that much for a tablet in a market pining for considerably lower prices, like $199?

Apple's idea of innovation is to double storage and charge considerably more for it. Perhaps CEO Tim Cook and company read too many blogs about supposedly overpriced Microsoft Surface Pro, which iPad gangbangers insist competes with the fruit-logo tablet. Not so -- Microsoft priced against Windows ultrabooks and MacBook Air. But based on that faulty comparison, Apple can claim bragging rights. The new iPad ships February 5, four days before Surface Pro -- that's no coincidence -- and by comparison for less but with more. With 128GB storage, Microsoft's slate is $999, while the other isn't just $70 less but packs 4G LTE radio, too. Reasonable comparisons stop there, and no one should be fooled, although many will be.

To be fair, Apple hasn't indicated how the new model will affect the price of others. The 128 gigger with WiFi only, will sell for $799, where the 64GB sits today. It's Apple pushing up iPad pricing -- now ranging from $329 to $929 -- that mindboggles. The strategy is tried-and-true Cook tactic, going back a decade. He long managed Apple's supply chain as COO before taking the top job in summer 2011.

But Cook has a problem: He's no Steve Jobs, nor should he be. My favorite analogy for the pair is Captain Kirk and Mr. Spock. Kirk, like Jobs, is more emotional, intuitive, risk-taking. Cook is more like Spock, making logical, logistical decisions that maximize margins. Under Jobs, Apple released category-creating, or redefining products, that left people breathless -- and wanting to buy. Cook brought Appleware to market and wrung every cent the supply chain would give.

Typically, new Apple products go through a clear supply-chain process. The big, new thing launches at some event, then Apple starts selling with a base set of features that are good, but not great. These offset startup manufacturing and distribution costs, while maximizing margins from a special concept: Cool. Plenty of buyers demand the newest, coolest product, and they're willing to pay a premium price to get it, and Apple certainly doesn't discourage them from doing so.

To many of these buyers, the tech gadget is as much an accessory -- statement of their coolness, superiority -- as useful product. Apple engages in a tried-and-true retail practice. It's good business. Clothing stores take a similar approach. There are teens who must have the newest wears from Aeropostale, American Eagle, Gap or Hollister at full price; they can't wait for sales. They want to be cool. Apple sometimes charges more for fashion, just like clothiers. Remember the black MacBook, which cost $150 more than the white model, simply for the color? With iPad 4, the pay-more principle applies.

You can see this process everywhere at Apple. First is the category definer, the new thing for the company. Then there is a process of iteration, where Apple improves features while keeping prices the same and sometimes lowering them near the end of the product cycle before something new in that category comes along. Pick any Apple product. The first several generations of iPod look similar (2001-2003), then Apple changed up with iPod mini (2004), nano (2005) and touch (2007) and completely refreshed the lineup (2012). The music player is an end-of-life category that will receive nominal reinvestment of time.

Look at iPhone. The first three generations looked pretty much the same. Hell, the original shipped with no MMS support (standard equipment everywhere else) and 2.5G data. Apple maximized margins through iteration, essentially sprucing specs, through the 3GS. But iPhone 4 brought in a new design, while 4S was the iterative product. Its successor once again resets with new design and improved capabilities. However, there are only so many ways to improve products around certain design concepts, so over time the differences are less noticeable.

That brings me to iPad. The first two models weren't that different. Apple changed up with iPad 3, but not drastically. Rather than innovation, Apple opted for souped-up iteration, by slapping on a high-resolution display and bigger battery supporting it. iPad 4 is like the 2, gradual improvements inside. By contrast, iPad mini is like the iPod mini, a smaller version of a successful product appealing to those who want a more carry-all device or something that simply costs less.

But iPad mini digresses from the Jobs model and feels all Cook. In the past, smaller Apple gear often cost less without overlap. iPod mini sold for less than Classic, as did nano later. MacBook and later the Air are smaller and less expensive, while offering different benefits -- major one being improved portability. By contrast, iPad mini pricing runs smack into iPad 4, ranging from $329 to $659; the larger tablet goes from $499 to $829, and starting next month $929.

That brings me to back to the 128 gigger's price. There's always someone who will pay more, if for no other reason than to feel cooler or better than everyone else. So Apple raises iPad pricing at a time when other companies focus more on value. That is, again, tried-and-true Apple, too.

Now for some contrast. Dell almost singlehandedly is responsible for PC pricing today. During the late 1990s and early 2000s, the Round Rock, Texas-based company engineered a superior supply and passed savings on to customers -- all while driving a price war that sank selling prices and margins with them. Apple chose to keep the Mac a premium brand, while maximizing margins on lower volumes. Now, in the 2010s, Apple has the superior supply chain, but chooses to pass profits onto investors rather than savings to customers. Hey, if people want to pay more for something, Cook and Company will let them.

But at the end of the day, there is something else: Can Spock command the starship Enterprise as well as Kirk, or James T. as well without the Vulcan? The answer says much, by analogy, about Jobs and Cook. I have confidence in Cook's ability to maximize margins. If iPad 4 128GB, or iPhone 5, indicates anything, Cook without Jobs isn't yet enough.