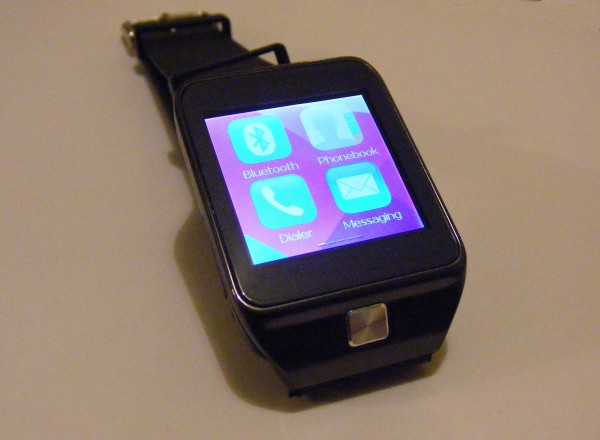 Like any new technology, smartwatches when they first appeared were fiendishly expensive. Now that budget manufacturers are getting in on the act however prices are starting to tumble.

The R5 from Chinese company Rwatch costs less than $50 and will work with most Android phones, but can it compete with the pricier offerings from big name manufacturers?

First impressions are pretty good. The R5 comes in a nice sturdy, white cardboard box which you wouldn't be ashamed to hand over as a gift. What you get in the box is the watch, a USB cable and some basic instructions. The watch itself is quite stylish (it's available in silver, gold or the black of the review unit) and it looks very similar to the Samsung Gear 2. It has a rubbery plastic strap and a shiny surround to the screen.

You only get one button on the front of the device which is used to turn it on and off and wake it from standby. There's a cover over the USB port on the left side which feels a little bit flimsy. The R5 has a 1.5-inch touch screen with a 240 x 240 resolution and the makers claim 120 hours of standby or three hours of talk time from a full battery charge.

Plug it into a USB port and leave it to charge for a while then you can get started. To sync it with your Android phone you need to download an app -- there's a QR code in the instructions to allow you to do this -- once connected with Bluetooth it allows you to sync various phone functions. There's all of the usual stuff related to calls and messages, plus you can control your phone's media player and camera remotely.

There's also an 'anti lost' function which will vibrate the watch to alert you if the phone goes out of range and some basic health monitoring in the form of a sleep monitor and a pedometer. Being a watch of course it also tells the time and you can choose between a digital or analogue-style display and there are stopwatch and alarm functions.

The R5 may look like a Gear 2 but it's a lot cheaper than it or any of the big name smart watches. It has a capacitive screen which proved to be quite responsive and with decent viewing angles. You need pretty accurate fingers to access some of the settings or to dial numbers though. If you look closely the display is a little pixellated but it's good enough for day-to-day use. It's not as if you're going to be watching movies on it.

There are only a limited number of rather weedy ring tones, but for most people the vibrate function is probably more useful as an alert anyway. As with a lot of Chinese devices the instructions are written in somewhat mangled English but most of the functions are easy to use anyway.

The device feels a bit chunky compared to a normal wristwatch, but given its price the R5 has a surprisingly good range of features and is nicely usable. You're also not tied to a particular make of phone, it should work with anything running Android 4.3 or above. If you want to give smartwatches a try without spending a lot of money it's worth a look.

Our review sample was supplied by GearBest.com and currently sells for $43.19. BetaNews readers can use coupon code: RWR5CN at the checkout to get it for $38.99. The coupon expires on March 3rd.