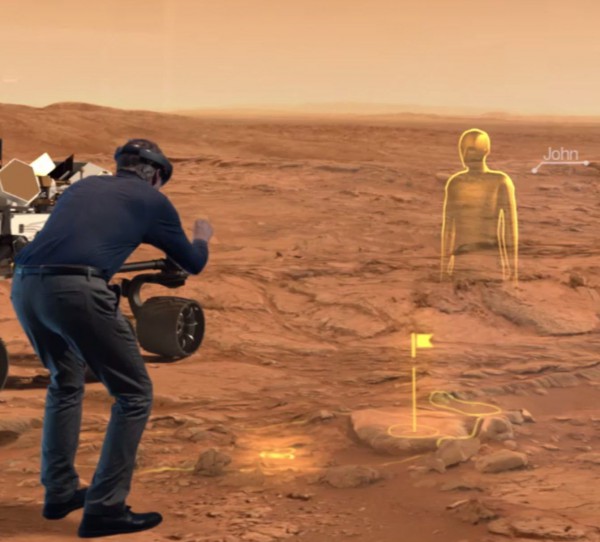 I was just a young man when the movie Total Recall was released. My dad and I saw it in the theater and it blew my mind. If you aren't familiar, it is an action/mystery/science fiction film that ultimately takes place on Mars. One of the most famous scenes is where a female alien has three breasts, but I digress. The Schwarzenegger film sparked a curiosity in me about one day actually visiting Mars.

Unfortunately, traveling to Mars is pretty much a death sentence; even if you did survive the long trip there, getting home would be almost an impossibility. In other words, with current technology, you could probably never get back to Earth. In 2015, however, visiting Mars might be easier than we think; virtually, at least. Microsoft is empowering NASA to experience Mars with the all-new HoloLens-powered technology called OnSight. Will the Curiosity rover be getting some company?

"OnSight will use real rover data and extend the Curiosity mission's existing planning tools by creating a 3-D simulation of the Martian environment where scientists around the world can meet. Program scientists will be able to examine the rover's worksite from a first-person perspective, plan new activities and preview the results of their work firsthand", says NASA.

The government agency further explains, "the OnSight system uses holographic computing to overlay visual information and rover data into the user's field of view. Holographic computing blends a view of the physical world with computer-generated imagery to create a hybrid of real and virtual. To view this holographic realm, members of the Curiosity mission team don a Microsoft HoloLens device, which surrounds them with images from the rover's Martian field site".

While everyone thought Microsoft's HoloLens was merely an early-stage tech demo, in reality, it already has actual uses. The virtual-reality helmet/glasses will enable scientists -- on Earth -- to explore Mars during the day, and then go home to their families for dinner in the evening -- impressive! Hell, all Google Glass did was make people look like dorks and get beat up in bars!

What do you think of OnSight? Tell me in the comments.