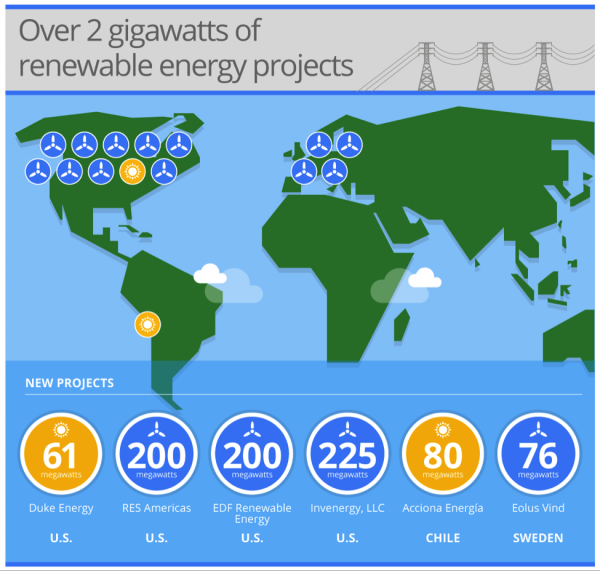 This week saw the big climate conference in Paris, bringing together numerous world leaders to discuss the changes occurring in our world. What we hope to get is improvement in the increasing amount of climate change, an effort to protect the environment for us and the wildlife that depend on it.

One answer is now coming from Google, which has long been a proponent of the need for change. The search giant has long backed renewable energy and now it claims to be the largest consumer of it. Well, the largest that isn't classified as a power company.

The latest purchase will add 842 megawatts of energy to power Google's massive data centers around the world. "Across three countries, we’re nearly doubling the amount of renewable energy we’ve purchased to date. We’re now up to 2 gigawatts -- the equivalent to taking nearly 1 million cars off the road", says Urs Hölzle, Google's SVP of Technical Infrastructure.

There's more to it, though. The contracts Google has signed range from 10-20 years, so they also serve as a way of backing up the companies for the future. Of course there's also financial gain, as Google will get energy at lower prices and save money for the company in the long run.

Beyond that, Google claims that its data centers are designed to be energy efficient while also driving change in the utility market. Hopefully all of this adds up to a pendulum swing for the environment. We could use it.