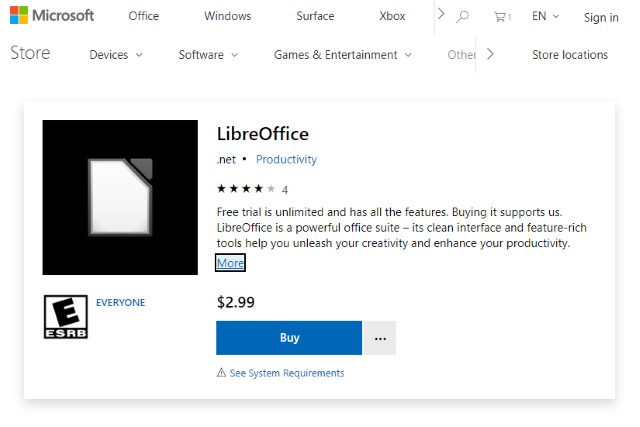 LibreOffice is one of many free alternatives to Microsoft Office, and the open source office suite has now arrived in the Microsoft Store.

While many people will be pleased by the appearance of a Store version of the software, some will be disappointed to find that the app is not free. At least not at first glance. There's a $2.99 price tag attached to Libre Office, but this is not necessarily a reason to let this put you off.

The app has not been released by The Document Foundation as you would expect, but by a developer by the name of .net. It's not clear whether this is because the software has been produced by a third party, or because there is an error in the listing -- but it is the $2.99 price tag that will raise alarm bells for some.

It seems there may not be cause for concern, however. The software appears to still be free of charge as a "free trial" can be downloaded, and this does not mean missing out on anything included in the paid-for version.

The description for the app reads:

Free trial is unlimited and has all the features. Buying it supports us.

LibreOffice is a powerful office suite -- its clean interface and feature-rich tools help you unleash your creativity and enhance your productivity. LibreOffice includes several applications that make it the most powerful Free and Open Source office suite on the market: Writer (word processing), Calc (spreadsheets), Impress (presentations), Draw (vector graphics and flowcharts), Base (databases), and Math (formula editing).

Installing the software seems to confirm that the "free trial" is indeed an unlimited copy of the office suite, so there's nothing to stop you from grabbing it and using it without parting with any money. If you feel like donating by making a "purchase", you can -- at the moment, though, it is not entirely clear where the money goes.

If you want to try -- or buy -- LibreOffice, you can download it from the Microsoft Store.