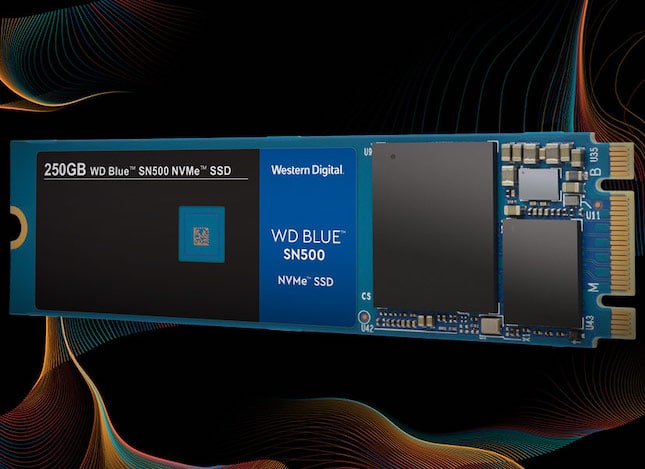 Last month, I reviewed the HUAWEI MateBook 13 -- an excellent Windows 10 laptop. I was impressed with many aspects of that computer, including the very speedy Western Digital NVMe solid state drive. I’m usually a Samsung man when it comes to SSDs -- after all, its drives are always superb. But thanks to the respectable performance of the drive found in the aforementioned laptop, I am now intrigued by Western Digital SSDs too.

Back in January, Western Digital announced the WD Black SN750 -- an NVMe SSD for enthusiasts. Today, the company releases a budget-focused NVMe SSD aimed at upgraders that don’t necessarily need the absolute fastest storage drive. Called "WD Blue SN500", the 2-lane drive is significantly faster than an SATA SSD, but slower than performance-focused NVMe drives. Most importantly, the M.2 2280 PCIe Gen3 x2 drive is very affordable, regardless of which capacity you choose.

"Leveraging the scalable in-house SSD architecture of the highly acclaimed WD Black SN750 NVMe SSD, the new WD Blue SN500 NVMe SSD is also built on Western Digital’s own 3D NAND technology, firmware and controller, and delivers sequential read and write speeds up to 1,700MB/s and 1,450MB/s respectively (for 500GB model) with efficient power consumption as low as 2.7W. Since demands on storage are continuing to grow and client workloads are evolving, the WD Blue SN500 NVMe SSD features high sustained write performance over SATA as well as other emerging technologies on the market today to give that performance edge," says Western Digital.