Donald Trump may have a bug up his ass over Huawei, but anti-Chinese propaganda aside, consumers around the world love the company's devices. Huawei's laptops, smartphones, and tablets are well-received by both professional reviewers and consumers. There should be no mystery how Huawei achieves such praise -- its products are elegant, well built, and not overly priced. The P30 Pro might be the best Android smartphone on the market.

With Android in particular, Huawei is not only providing an excellent customer experience through hardware, but with OS updates too. In fact, the company is celebrating an impressive milestone -- more than 80 million Huawei device users are now on Android 9.0 Pie. Technically, it is EMUI 9, which is Android plus Huawei's improvements. This puts many other device makers, such as Samsung and LG to shame.

"Previously only available for the Mate10 series (launched in 2017), the P20 series, Mate RS and Nova3 (all launched in 2018), Huawei is now making EMUI 9 available for older models such as Mate9 and P10 as part of its commitment to continuous upgrades and deliver more value to consumers. EMUI 9 marks the second major version upgrade for previous generation flagship handsets providing exceptional experience with the most up to date Huawei user interface. Huawei will also continue to provide regular security patches, protecting user privacy and keeping devices secure," says Huawei.

The company further says, "To upgrade to EMUI 9, individuals can follow instructions available in their phone by going to Settings > System > Software Update. Select the setting menu (three vertical dots) in the upper right corner to 'Download latest full package' and to set 'Update setting', such as to download over WiFi and overnight. Select 'New Version' when it appears on the System Update main screen, and then select 'Download and Install' to begin installation and for the overview of what is included in the update. Alternatively, individuals can also sign up for EMUI upgrade through the HiCare app." 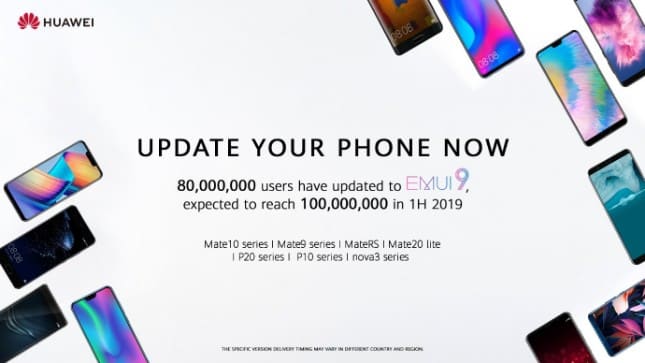 Huawei shares the following devices that are getting an upgrade to Android 9.0 Pie

It is important to note that this 80 million number includes both consumers that upgraded from EMUI 8 and those that bought new Huawei devices with EMUI 9 pre-installed. Even more impresive, however, Huawei is vowing to have 100 million users on EMUI 9 by the end of this month.

Hopefully this silly USA ban gets resolved soon, so Huawei can keep offering updates to its users. Hell, even Google is asking Trump to let Huawei retain access to Android!