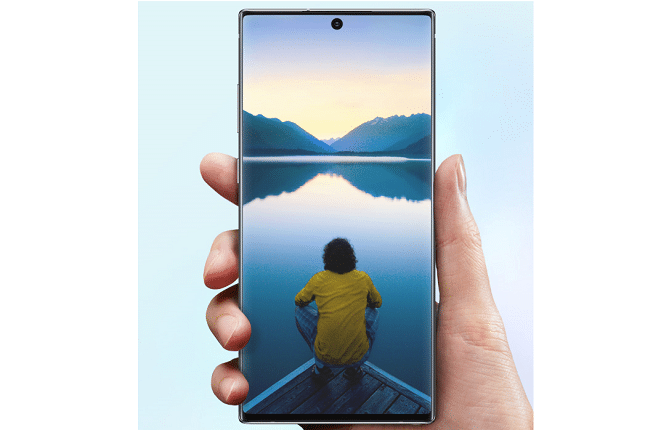 Earlier today, Samsung had its big "Unpacked" event in New York, and BetaNews was there to take it all in. As was expected, the Galaxy Note10 was unveiled. Yours truly was in the third row, listening to well-placed Samsung employees loudly "ooh" and "ah" at every little thing shown off on stage. While their feigned enthusiasm was comically overdone, there actually was some exciting stuff revealed, including the removal of the old-school headphone jack -- finally!

This year, there are two new Android 9.0 phones -- Note10 and Note10+. This is the first time a Note smartphone has been offered in more than one screen size. The plus in the name indicates it is the better device, including having a bigger screen. It has a 6.8-inch Dynamic AMOLED Infinity-O display with 3040×1440 resolution, while the non-plus has a 6.3-inch screen with a 2280x1080 resolution. Both are HDR10+ certified.

Cameras are, for the most part, the same on both. Each has a 10MP front camera. On the rear, they both have a 16MP ultra-wide camera, a 12MP wide-angle cam, and a 12MP telephoto shooter. The 10+ adds a "DepthVision" rear camera, however, which is rather neat. It allows you get accurate measurements of objects, but that is not the coolest thing. Actually, with the Galaxy Note10+ DepthVision camera, you can take 3D scans of objects which you can then turn into an animated GIF. You can even send the scan to a 3D printer and make a copy of it!

What really impressed me regarding the cameras had to do with the S-Pen -- Samsung's fancy stylus. In addition to providing the ability to remotely take pictures, it now has a 6-axis Sensor, which allows you to use gestures to change camera modes. By holding a button down on the pen and flicking your wrist, you can easily change camera modes and sensors. In my testing, the gestured worked flawlessly. It should prove to be a very handy feature. There is even a cool AR Doodle app, which lets you doodle in AR -- it is insanely fun and works brilliantly.

The Note10 and 10+ come with a 7nm 64-bit Octa-core processor, but the speed and model could be different based on your market. In other words, the USA model may have a slightly different CPU than, say, South Korea. 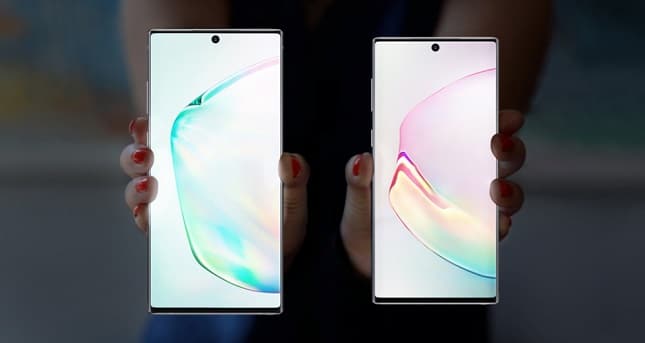 As you can see, the 10+ is clearly the better device, but wait, there's more -- it even has a bigger battery. The Note10 has a 3,500mAh battery, while the 10+ has 4,300mAh. Regardless of the bigger screen and resolution causing more battery drain, the 10+ should still have longer battery life. Samsung claims both can last "all day," but when you do need to juice up, both phones support wired and wireless quick charging. And yes, they can both pull double-duty as chargers themselves -- they can wirelessly juice up another Qi-enabled device.

Believe it or not, Microsoft CEO Satya Nadella was on hand to highlight a new partnership between the Windows-maker and Samsung. There is a new feature called "Link to Windows" which is basically screen-mirroring when connected via USB-C. In addition, Microsoft will soon let Note10 owners (and hopefully all Android users, eventually) send and receive both calls and texts from within Windows 10 via the Your Phone app.

This begins the next chapter of our long-standing partnership with Samsung and is another step in our journey to bring the best of Microsoft productivity to the devices you know and love. We are excited to announce that the new Samsung Galaxy Note10 phones will help you get more done right out of the box, natively integrated with best-in-class productivity apps and services from Microsoft including OneDrive, Outlook, Your Phone app with Link to Windows, and access to Word, Excel and PowerPoint. As Satya said today, our ambition is to help people be more productive on any device, anywhere -- and the combination of our intelligent experiences with Samsung’s powerful, new devices, including Galaxy Note10 and Galaxy Note10+, make this a reality.

To see all of the features in a more concise manner , Samsung shares the useful infographic below.

From the very beginning, the Galaxy Note has stood for the best-of-the-best technologies and features. The Galaxy Note10 re-imagines this promise for the modern Note fan who uses their smartphone to take their productivity and creativity to the next level, and who effortlessly flows between ideas and endeavors at a moment’s notice. Every element of the Galaxy Note10 was designed to help users achieve more. Whether they’re finishing a big project for work, capturing and editing a video, or playing their favorite mobile game, the Galaxy Note10 will help them do it faster and better. 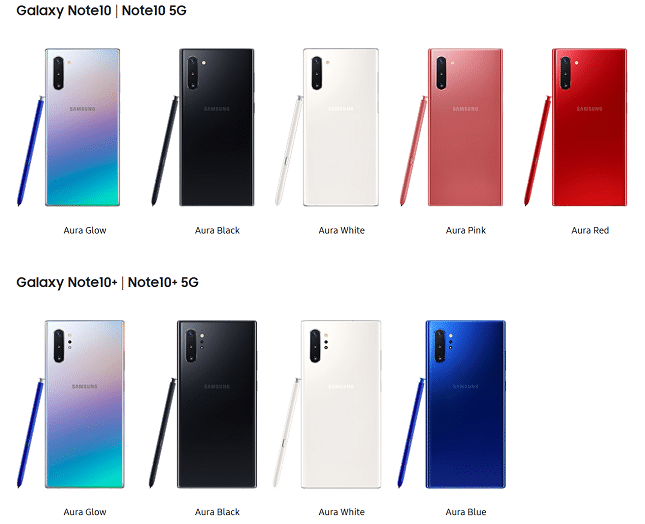 Regarding the Note10 and 10+ cost and availability, I have good news and bad news. The good news is, you won't have to wait long -- they will hit stores August 23 (although you can pre-order now). The bad news, as you can expect, is the price. The Note10 starts at $950, while the 10+ starts at $1,100. Yeah, that is an obscene amount for a smartphone. With that said, there are likely to be carrier promotions to hopefully lessen the blow a bit. Hey, you may go into debt for the Note10, but at least you have a lot of colors from which to choose.

9 Responses to Samsung Galaxy Note10 and Note10+ are powerful, beautiful, and very expensive