Mission: Assemble a full-HD video camera setup that can fit into a carry-on bag with a total weight under 6 pounds. 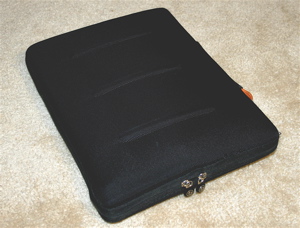 At the end of 2009, I was challenged to put together a video camera rig that was as light and portable as possible, that could still produce "Web-broadcast-quality" video. The weight limit was between 5.5 and 6 pounds, or the weight of a 15-inch Macbook Pro, and it had to be able to fit entirely (tripod and all) into my usual carry-on luggage: a Timbuk3 messenger bag.

Why? Because it's just not enough to be a simple reporter these days. If you really want to excel in online media, you have to be a one-man, multi-format wellspring of content. If you're a self-employed news blogger or indie journalist, your livelihood depends on being able to put up compelling new content every day. It could be traditional 8-12 paragraph news stories, it could be video clips, it could be audio podcasts, it could be photo streams, tweets, or even status updates. 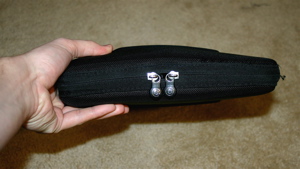 If you're not producing something, people are not clicking. So it behooves the modern journalist on location to have all the devices which could help create this content.

Fortunately, we're at a point where we can reproduce high quality imagery with smartphones like the iPhone 3G S or tiny pocket camcorders like the Flip Mino or the Sony Bloggie, which is quite blatantly marketed to the amateur content producer. With tools like these, amateurs can assemble a pretty solid rig with only a little money, or hobbyists can set up one that's unbelievably portable, so that's where I began.

Sometimes I am embarrassingly geeky, and this project brought out my worst right away. To begin, I drafted up a mental player character sheet that listed all the important attributes of my ideal setup, which included image quality, audio quality, depth of feature set, portability, cost, and so forth. The idea was to get a camera with a maximum portability ranking, understanding that certain other areas would suffer due to the size limitations. These areas would then be improved by other elements of the rig. Sort of like Questor the elf in Gauntlet, he's got the weakest weapon, but he is by far the fastest runner.

So as the centerpiece of the rig, I chose the Kodak Zi8. With a weight of only 6 ounces and a body almost exactly the same size as the old Treo 650, it can fit into a hip pocket easily. Though it's a little bigger than some of the Flip cameras available now, the Zi8 can capture 1920 x 1080 30 fps, 1280 x 720 (60 or 30 fps) or WVGA video, has 4x digital zoom, face recognition, electronic image stabilization, and the killer feature...a 3.5mm stereo input jack.

It's hard to believe, but the Zi8 is the only pocket camcorder right now to have that mic jack. With it, you can replace the weak omnidirectional built-in mic with a high-quality shotgun mic so the camera can "hear" exactly what it is looking at, or you can attach a wireless Lavaliere so you can close-mic your subjects. It is absolutely the main reason I chose this camera.

To quote Mike Figgis, director of Leaving Las Vegas and Cold Creek Manor, "The power of sound to put an audience in a certain psychological state is vastly undervalued." This applies even to the humble YouTube video; if the sound is bad, it really rubs the viewers the wrong way. 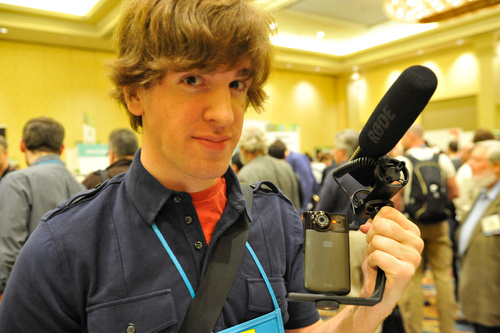 So what did I do? I paired the tiny Zi8 with a rather large Rode VideoMic on a $16 handheld bracket from Best Buy. Yes, the combination of a regular-sized mic and pocket-sized camera makes everyone do a double take, but the results are extremely good, and the whole unit weighs just barely over two pounds. With the Quantaray QSX Digipro 100 tripod (which is unfortunately now discontinued) it still weighs under four pounds.

I took the work-in-progress camera rig to CES 2010 to test it out, and aside from being stopped to explain what I was doing with this "mutant camcorder" the camera and mic proved to be an excellent combination. Here's a video that I took at the unveiling of the Sprint Overdrive filmed at 1280 x 720, 60 frames per second.

For shots like those in the video above, the setup is flawless. Handheld shooting is also an excellent experience, but there are a number of issues that must be attended to if you really want a high quality video to come out of the little Zi8, which I'll go through on the next page.

Next: Getting flawless videos from a tiny camera...