A BlackBerry browser with a 100% Acid3 score: RIM finally picks up the Torch 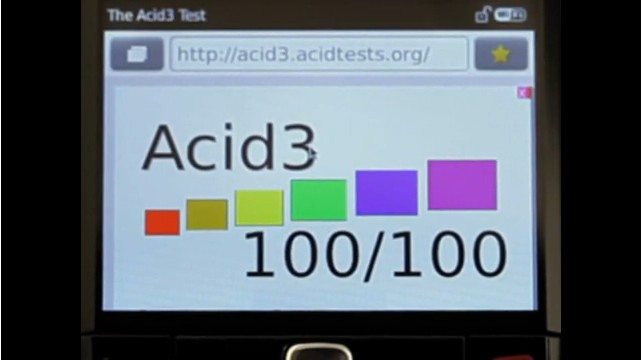 It turns out Microsoft isn't the only mobile platform producer resetting its ecosystem this week. In a lower-key move that could actually affect millions more customers than Microsoft's reboot of Windows Phones yesterday, Research In Motion today took over control of Mobile World Congress' side-show, called "App Planet," with a series of developer-focused seminars whose intention appears to be resituating developers on the new purpose of the BlackBerry platform.

While BlackBerry has never been much for eye-candy, what passes for such took center stage during a demo by CEO Mike Lazaridis this morning. Making good on the promises inherent in RIM's acquisition of browser maker Torch Mobile last August (taking it out of the Windows Mobile picture for good), the company presented the first public demonstration of a real Web browser for BlackBerry. Perhaps the last mobile platform to have a built-in browser built for standards higher than 1997, the new BlackBerry browser produced accurate Web pages, zoomed into and out of pages with reasonable speed (not exactly an iPhone-like rush, but not thumb-twiddling either), and scored a 100% on the Web Standards Project's Acid3 test.

By contrast, Opera Mini (a third-party product considered the browser of choice by many current BB users) scores a 54% on the same test. And even with JavaScript rendering turned on, BlackBerry's current built-in browser for system version 4.5 (still used by last year's models) doesn't parse the Acid3 well enough to even adequately inform the page that scripting works at all -- it actually scores a 0%.

The device used in the demo (at least, the only portion RIM has released to the public today; MWC's own video servers were not carrying the demo and reported themselves down when we checked) was a BlackBerry Bold 9700, already widely available. It uses the touch-sensitive pad rather than the trackball of earlier BlackBerrys, or the touchscreen of the Storm and Storm 2. It also uses a 624 MHz processor, at a time when smartphones on Qualcomm Snapdragon and other platforms have already raised the bar to 1 GHz, and the word dual-core is being used in a smartphone context. So a respectable browser can only go so far to restore BlackBerry's reputation in the "user experience" department, as many WebOS, Android, and iPhone owners will point out.

The new browser does appear to take a few visual cues from Mozilla's "Fennec," or Mobile Firefox, particularly in the use of a few charcoal-colored buttons alongside the address bar, that scroll up and out of the way as the user scrolls up. In the demo clip we're seeing, these appear to be History and Bookmarks buttons, and their placement implies easy access to Storm and other touchscreen users.

What the demo does not show us is the performance of embedded video. The Bold 9700 currently supports H.264, WMV3, MPEG4, and Flash rendering through On2's VP6 codec. But how video performance looks in the context of a Web page, while the user is scrolling, will say a lot about the performance of the browser in BlackBerry's (slower) processors, and whether it's really clinched the whole "user experience" motif.

Perhaps more importantly than the simple inclusion of a Web browser that doesn't make every page look like something your nephew spilled from his Lego box, is the integration of Torch Mobile's version of the WebKit rendering engine into the BlackBerry environment. The result will be the integration of standards-based widgets that follow specifications published by the Joint Innovation Lab yesterday, for formal submission to W3C. The goal here is to open BlackBerry to the same level of Web apps deployable through PCs; and the only way to do that was by means of a 100% compliant rendering engine.

Attendees at App Planet today are being given a full-day symposium on the new BlackBerry application model, which includes the JIL's work. The JIL framework utilizes embedded Web resources, a BrowserField object addressable from the script, and JavaScript extensions that handle the addressing. But all this takes place using standard HTML, CSS, and JavaScript -- nothing specific or proprietary to BlackBerry. The Gears API (formerly Google Gears) is also employed. Extensions are embedded in the widget's COD file, so they're not actually part of the operating system, and once deployed, they're not accessible from Web pages -- so they can't be exploited by malware. RIM's toolkit for producing JIL-compliant widgets, BlackBerry Widget SDK 1.0, is still on Beta 3 in its development cycle.

A recently released presentation on the Widget SDK fills in a few details that weren't released in the public disclosure of the demo today: It's for version 5 of the system software, which means it won't work for holdouts with older Curve and 8830 models.

Transcripts and video of this morning's keynote were not available at press time, although multiple sources cite RIM's Lazaridis as having borrowed a page from Google, introducing the new application concept for BlackBerry as "superapps." Though demos of the concept were apparently reserved for paid attendees to today's seminars, he was quoted as having described a "superapp" as an application aware of what else was going on in the greater phone context, and capable of making itself available at the proper time, rather than just through some menu grid. One example he did give was a Twitter app that made itself available through the BlackBerry's inbox.

In what was taken as a preview of his keynote speech, Lazaridis told analysts with Rysavy Research, in a report cited by India's Economic Times, as having cited the bandwidth crunch AT&T has warned about, as the reason why developers should build more lightweight mobile applications. The CEO is quoted as saying, "Manufacturers had better start building more efficient applications and more efficient services. There is no real way to get around this."

Well, actually, there is: You can produce a more efficient browser that renders according to standards, so that users aren't reloading, reloading, reloading just to see if they can read what they're supposed to read. In that respect, RIM may have just done its part for the environment for the whole year.

17 Responses to A BlackBerry browser with a 100% Acid3 score: RIM finally picks up the Torch