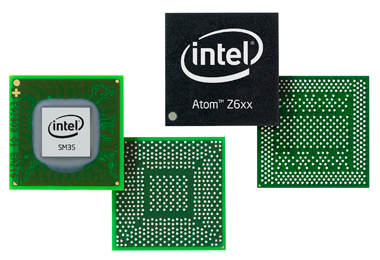 Intel on Monday announced the availability of its "Oak Trail" Atom processors, designed for use in mobile tablets, convertible notebooks, and fanless environments that run Windows, Chrome OS, or Meego.

With more than 35 design wins to its name so far, Intel's Oak Trail Atom chipset (Z670) is expected to make its first appearance next month, and continue to appear throughout 2011.
Companies such as Asus, Samsung, Evolve III, Fujitsu, Lenovo, Motion Computing, Razer, and Viliv have all announced products based on the platform.

We captured just a tiny bit of what Oak Trail is capable of at CES 2011 with Lenovo's IdeaPad Slate. At the time, Lenovo was estimating a May launch with a sub-$500 pricetag, and could not guarantee which software the device would be certified to run.

The availability of Oak Trail-based tablets should be especially significant to those industry watchers acutely aware of Microsoft's presence (or lack thereof) in the consumer tablet space. Last year, Microsoft CEO Steve Ballmer put special emphasis on the platform, saying it would cause a big jump in Windows 7-based tablets in 2011.

Some of the hallmarks of the Z670 chipset are its small size (60% smaller than previous generation netbook processors), a Thermal Design Power of 3 Watts, "Deeper Sleep" for decreased power consumption when sleeping, "Speed Step" for matching performance to demand, Integrated graphics with support for 1080p HD video playback.

The SM35 chipset used with these processors uses a 45nm process, supports SATA interface, up to 4 USB 2.0 ports, HDMI out, SDIO and eMMC support, and Intel "High Definition Audio."

One Response to Intel launches Oak Trail chip for tablets: Win7, Chrome, Meego tabs in May