Well, here's one way to get 3G Video Chat on the T-Mobile Nexus S

With Android 2.3.4, Google equipped its Google Talk app with video and voice chat support, which became a banner feature for the Nexus S on T-Mobile. Unfortunately, in May, T-Mobile began to block users from connecting to video chat over their 3G/4G connections, and only allowed users to connect while on Wi-Fi. 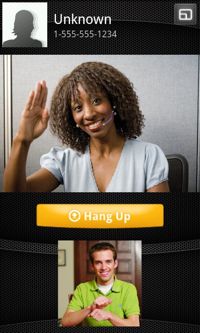 The catch, of course, is that VRS (video relay service) is not your usual video chat application. It's specifically designed for deaf, hard-of-hearing, or speech impaired individuals who communicate with sign language and want to communicate with people who do not. Signing into the service brings a sign language interpreter into the call between two people.

Though it is one of video chat's more established arenas, there are still few VRS options in the consumer mobile space.

7 Responses to Well, here's one way to get 3G Video Chat on the T-Mobile Nexus S