While Xperia Ray is designed for more typical smartphone use, Xperia Active takes a very different approach and targets the more athletic user. It includes a handful of unique features that make it stand out in the ever-growing Android crowd, especially as we enter the summer months. 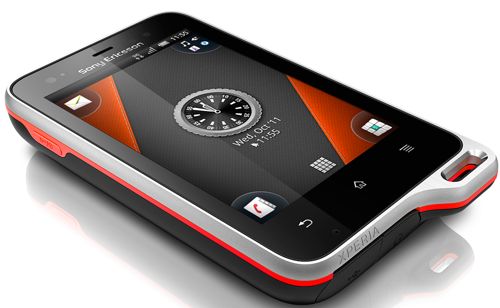 The phone chassis is designed for users who might not necessarily want to keep it in their pocket, so in addition to the scratch-proof mineral glass screen, it incorporates a lanyard eye on the casing and comes with both arm straps and wrist straps so users can wear it on their body.

Additionally, it supports ANT+ wireless sensors and includes a built-in heart rate/pulse monitor app for tracking workouts. It is also dustproof and water resistant. Sony Ericsson says Xperia Active can be submerged under 1 meter of water for 30 minutes and still work, and that the touchscreen has been designed to work while the finger or the screen are wet.

Sony Ericsson looks like it has created an Android device that would be perfectly suited for frequent trips to the beach or the pool, but unfortunately it won't be released until some time in the third quarter of 2011 (which begins in August,) thereby missing a Summer release for the northern hemisphere.