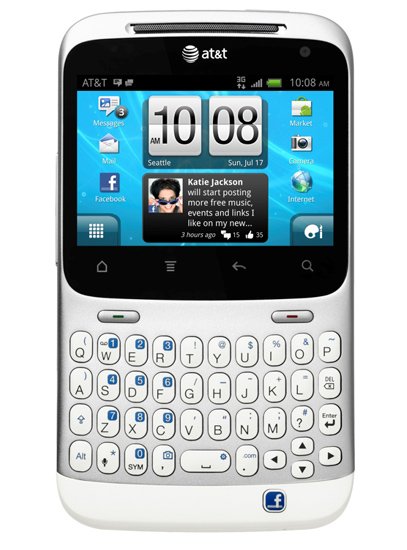 Smartphone maker HTC on Wednesday finally announced AT&T and Telus will be the first two carrier partners for the long-rumored "Facebook Phone," known as the HTC Status.

What makes it a Facebook Phone? The dedicated Facebook Button, of course, and the way it facilitates instant Facebook sharing. Users can shoot photos and video and instantly share them to Facebook by pressing the dedicated button, and long-pressing the button automatically checks the user's location into Facebook Places, tapping the button while listening to music lets users share the song title and artist instantly on their wall or with friends.

Also, this device offers a deeper integration into Facebook's services than the standard mobile app allows. Facebook Chat, for example, is available on the Status, and the lock screen can be loaded with Facebook app shortcuts so users can quickly share content without even unlocking the phone.

Given the mobile focus of Google+ and the future ability for all Android phones to share content instantly with Google's new social sharing service, Facebook's move to lock this deep sharing functionality into a single device seems ill-timed; especially when considering how long a Facebook Phone has been rumored.

No pricing or availability has yet been announced for the Status, but it is expected to arrive this summer in North America.

8 Responses to Facebook Phone - the HTC Status - coming to AT&T, Telus this summer