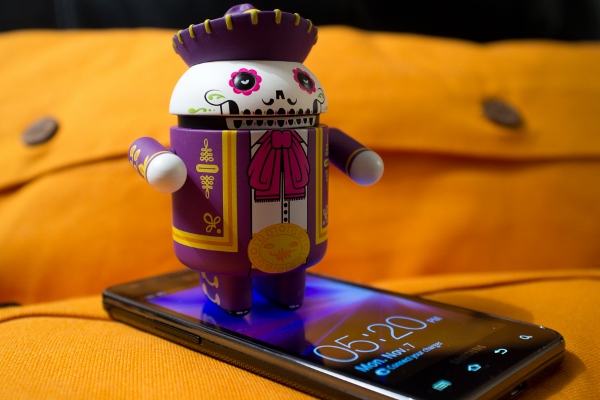 I've gotten off my purest high horse and come to look at Android differently. Starting with my purchase of the HTC-manufactured Google Nexus One in January 2009, I used pure Android smartphones, untouched by hardware maker or cellular carrier mods; no skins, no extras. Pure Android was the best, I believed. But over the last couple months, I've come to realize that the best thing about Android is what third parties -- and not Google -- do to make it better. Go ahead, eat that Ice Cream Sandwich on Galaxy Nexus. Gingerbread is good enough for me.

Pundits of all types harp about fragmentation -- that it holds back Android and makes competing against iPhone harder. Oh yeah? If 550,000-plus Android activations a day is a problem, give it to me. What a failure to have. At the end of September, Android smartphone OS share, as measured by US cellular subscribers 13 or older, was 43 percent in third quarter, up from 39 percent at end of June, according to Nielsen. By comparison, iOS continued a year-long trend of no growth, with 28 percent share.

The State of Android

The state of Android fragmentation is this, as of November 3:

The newest version, Android 4.0 (Ice Cream Sandwich) doesn't yet show up in the numbers and likely won't until the Samsung-manufactured, Google-branded Galaxy Nexus starts shipping next week. Ice Cream Sandwich unifies the two forks for Android -- Gingerbread for smartphones and Honeycomb for tablets -- and is chock full of new features. But like older Android versions, there's no land rush. For example, HTC has committed to Ice Cream Sandwich in "early 2012" without saying what that really means. Handsets getting Android 4.0: EVO 3D and Design 4G on Sprint, Vivid on AT&T (which just launched November 6), Amaze 4G and Sensation, XE and XL on T-Mobile and Rezound on Verizon (which launches November 14).

Unquestionably, fragmentation persists, but it's really more about users being on older Android versions than the newest thing. Apple controls iOS updates and pushes them out at will. Carriers and manufacturers determine which Androids get what software upgrades -- hence, a major reason for fragmentation. Anyone with iPhone 3GS, 4 and 4S can get iOS 5 (that's the newest version) right now. The argument goes: Newest version and most users on it is huge competitive advantage over Android.

But as Windows XP's lingering success shows, newest isn't necessarily the best. What matters more, particularly when third parties are licensing operating systems, is the ecosystem that evolves around the platform and what it delivers to users. Related: Applications. There are plenty enough compared to Apple's App Store -- 315,000 according to AppBrain and 550,000 says AppLib.

However, not all apps are available for all devices, because of fragmentation and slow developer uptake for Honeycomb. There Google protects developers and phone users. Android Market segregates apps based on the OS version running on the phone. Most Froyo and Gingerbread apps are available to most devices (running those OS versions or later, of course). The mechanism works quite well, and actually limits some of the more negative effects fragmentation causes.

Android is doing surprisingly well considering the state of fragmentation and that most users are on some 2.x version, when 4.0 is newest. There, carriers and manufacturers deserve credit for improving the stock OS. With iPhone, it's one size fits all. iOS is pretty much the same across carriers. Apple doesn't permit them to customize the phones or even put on their own branding. In the United States, an AT&T iPhone 4S is indistinguishable from a Verizon model. Apple tightly controls branding and software.

Recently, I started visiting Verizon and T-Mobile stores, spending time exploring higher-end Android smartphones, primarily from HTC and Samsung, which both skin the operating system -- with Sense and TouchWiz UI, respectively. To my surprise, I'm generally impressed with these UI add-ons, and that's an unexpected response. More surprising, well to me, is my reaction to carrier customizations, which are seemingly beneficial. I've long scorned carriers for loading up crapware that slows down performance and diminishes the user experience. But I'm not seeing much of that on higher-end Android smartphones.

Personal user experience is perhaps the best explanation. In September and earlier this week, I purchased two different Samsung smartphones -- the Galaxy S II and Galaxy S II Skyrocket, on AT&T, respectively. Both are chock full of customizations, Samsung's TouchWiz UI and AT&T apps and services, that really add bang to the user experience. The Android enhancements make both phones much more enjoyable to use and more practical than the Samsung-manufactured, Google-branded Nexus S.

I also find the fresh enhancements, coupled with the hardware, deliver better experience than iPhone 4 (I haven't used 4S). There's no Honeycomb, no Ice Cream Sandwich -- just Gingerbread with a twist. Next week my wife receives Kindle Fire, which uses Android 2.3.4.

The Galaxy S II is simply the best phone I have ever used, and I was sorry to part with it. But on Tuesday, I trucked down to the local AT&T store and exchanged the S2 for the larger Galaxy S II Skyrocket, which also supports LTE. I'm not as satisfied with the larger phone (4.5-inch vs 4.3-inch display) or increased thickness -- doesn't feel as good in my hand -- but the performance is excellent and AT&T enhancements make it better.

For example, on both phones, whenever I go to McDonald's or Starbucks, the Notifications Bar indicates there is an AT&T Hotspot. Skyrocket has Visual Voicemail, and it's a much more pleasant feature to look at and use than the comparable capability on iPhone.

TouchWiz UI eye-pops Gingerbread, with more color and some great features, some of which are similar to those just now coming in Android 4.0. For example, there's option to send a text message when rejecting a call, and Social Hub brings together Facebook, email, instant messaging and Twitter into one app. I looked at this one askance, but it works well and consolidates communications and social interactions.

Skyrocket's Android 2.3.5 touched up by AT&T and Samsung is much better than the same version on my wife's Nexus S, changing my perception. I've given up my purest ways. It's not so much what Google does to Android that matters but third-parties.

Android fragmentation doesn't matter, as long as carriers, phone manufacturers and software developers do their jobs.