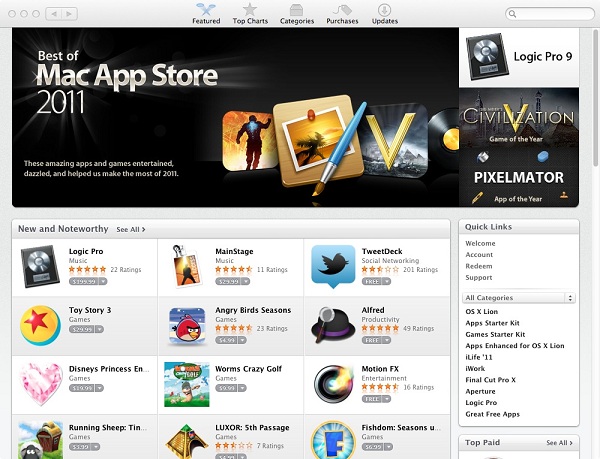 Seven years have passed since I first strongly suggested to Microsoft product managers that they should add a software applications store to Windows. The idea didn't go over too well. Today, Apple showed Microsoft why an app store makes loads of sense inside the operating system and why Windows Store's February launch is way too late.

Apple made Mac App Store an add-on to OS X 10.6 Snow Leopard in January, and shipped it as part of successor Lion in July. Today, the company claimed 100 million downloads. Caveat, and this is where marketing mumbo jumbo needs closer look: The company doesn't say "unique downloads". I paid for Lion once and installed it on three Macs, as licensing terms permit. That's three downloads from one purchase. Redownloads jack up the numbers.

Unique matters, as does the number of free versus paid apps, which also ignores. The Mac Fanclub of bloggers and journalists can't have it both ways. Whenever Google struts out Android Market download numbers they rebutt: There are many more paid apps at Apple's mobile App Store, which is true. Paid vs free is legitimate question to ask here, too, particularly since Apple touts the 70 percent cut developers take.

"With more than 100 million downloads in less than a year, the Mac App Store is the largest and fastest growing PC software store in the world", Phil Schiller, Apple's senior vice president of Worldwide Marketing, claims. See, Macs are PCs, oh yea Apple Fanclubbers. :) Say, CNET, do you want to answer whether or not Schiller's statement is factual? How does Download.com compare?

Certainly Schiller's statement is true for app stores built into PC operating systems. There, Microsoft has got nothing but promises, and the Apple Fanclub rightly can gloat. While Microsoft last week demoed the Windows Store coming in February, Apple offers real download numbers -- and that means cash developers can put into the bank -- today. Say, developers, which matters more to you? Cash and carry now or promises of the future?

3. Developers can sell apps for which they are paid; the app store deters piracy.

Operating systems thrive on applications, and perhaps it's no coincidence the same year Apple launches its app store, Mac sales are way up.

By the way, where's the Federal Trade Commission when you need it? Isn't the agency supposed to slap around companies that make false claims about their products? Or perhaps press releases don't count like advertising does. From the PR: "Apple designs Macs, the best personal computers in the world, along with OS X, iLife, iWork and professional software". The best? Say, HP, Lenovo and Sony, are you going to let that dog lie on your front porch? Apple, by what measure are Macs the best?

Commenters, since Apple likely won't respond, please give your answer.