Samsung's Bada will merge with Tizen. Just WTF is going on here? 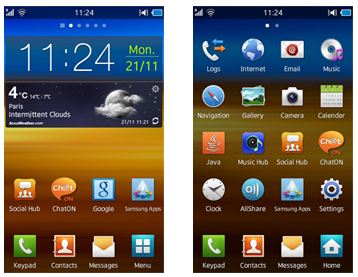 Tizen is the latest incarnation of the seemingly ever-changing mobile Linux distro formerly known as MeeGo; which itself was the combination of Nokia's Maemo and Intel and the Linux Foundation's Moblin projects.

Tizen was first announced less than four months ago, and was only released as an Alpha platform preview two weeks ago, which included a source code preview and SDK preview for the operating system.

Meant to be more than just a mobile phone and tablet operating system, Tizen's target devices include smartphones, tablets, netbooks, in-vehicle systems, and smart TVs. Along with this Alpha, the LiMo foundation announced it had changed its name to the Tizen Association.

On the other hand, Samsung bills Bada as its "smartphone for everyone" operating system. The company has positioned Bada mostly at the smartphone conversion market. That is, conventional mobile phone customers who intend to purchase their first smartphone.

There are currently ten Bada-based devices all with the "wave" nomenclature; and just days before the first preview of Tizen was released, Samsung released Bada 2.0, which is shown in the video below.

Somewhat despite all of this, the Bada platform is kernel-configurable, so it can run either on the Linux kernel, or on a real-time operating system kernel for deployment in embedded systems, making it useful in areas beyond the handset.

Samsung has not come forward to say where Tizen will come into play in Bada, or indeed whether this will result in some sort of hybridized operating system at all. Similar to what has happened with the predecessors to Tizen, it is possible that the convergence will be purely on the development side, where Bada and Tizen developers use the same software development kit and APIs, and the operating systems remain separate, on separate devices.

A Samsung representative told Forbes that one or two Tizen-based Samsung devices will be released this year, but he did not say what devices they would be, or the form the operating system would take.

Unfortunately, this has been one of the main problems plaguing this particular variety of mobile Linux…there is a clear push for openness and standards support, but there is no widespread manufacturer support. Instead, it is usually a single OEM catering to a tiny audience of highly competent power users (who often are themselves the software developers.)

The first and only phone to run Moblin was the LG GW990 which was also the first smartphone to run on the Intel Atom processor platform, and other builds of Moblin concentrated on netbooks and nettops exclusively.

Maemo existed only on mobile internet devices (MIDs) such as the Nokia 770, N800, N810, and N900 before it was merged with Moblin to form MeeGo.

After a year or so in development, MeeGo debuted on the Nokia N9 and was immediately discontinued. Then in September 2011, it was announced by Intel employee Imad Sousou that in collaboration with Samsung MeeGo would be replaced by Tizen during 2012.

On the day of its big name change, the Tizen Association said it will be introducing a partner program in the first quarter of 2012, which will "enable additional stakeholders to provide input and take part in market development activities associated with Tizen."

Next month, the Association is presenting at Mobile World Congress in Barcelona, so we expect to find out more about this development there.

14 Responses to Samsung's Bada will merge with Tizen. Just WTF is going on here?