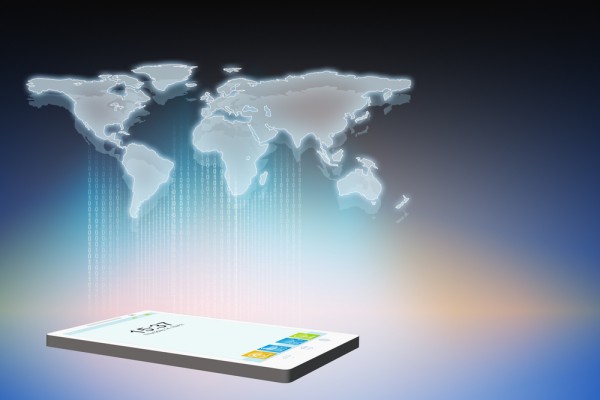 Last month after analyzing Gartner's Q4 handset sales data, I quipped: "At this pace, smartphone sales should surpass feature phones within a couple quarters". Today, IDC released a real forecast, claiming that smartphone shipments would do just that. While not exactly sales, the change would mark a significant shift in the mobile phone market, with China charging ahead of all other countries.

The analyst firm expects smartphone shipments to nudge past 50 percent for the year, a forecast I consider to be overly conservative. Based on sales, the category already has 44 percent share, according to Gartner. The smartphone market is so fast-changing, few analysts get anything right. As I explained in December, IDC repeatedly underforecast smartphone shipments throughout 2012. The general view is likely right, but with feature phones falling at brisker pace.

IDC estimates manufacturers will ship 918.6 million smartphones this year, rising to 1.7 billion in 2017, for about two-thirds of global handset shipments. The changing dynamic creates and closes opportunities, depending on markets. The United States and parts of Europe rapidly reach saturation levels, where adoption of more sophisticated handsets slows and early leaders Android and iOS lock out competitors. Elsewhere, low smartphone adoption makes more opportunities for all.

IDC singles out three of the four BRIC countries -- Brazil, China and India -- as huge growth markets, but for different reasons. During 2012, China passed the United States as the largest market for smartphones, which account for about two-thirds of shipments there.

"While we don't expect China's smartphone growth to maintain the pace of a runaway train as it has over the last two years, there continue to be big drivers to keep the market growing as it leads the way to ever-lower smartphone prices and the country's transition to 4G networks is only just beginning", Melissa Chau, IDC senior research manager, says.

As I explained last month, cheap-selling smartphones and Android's rapid rise in China -- among buyers and manufacturers -- weakens iPhone's position in Apple's second-largest market. "China is a massive growth prospect, but Apple is not making the market share impact there that it is in other markets", Nicole Peng, Canalys China research director, says. 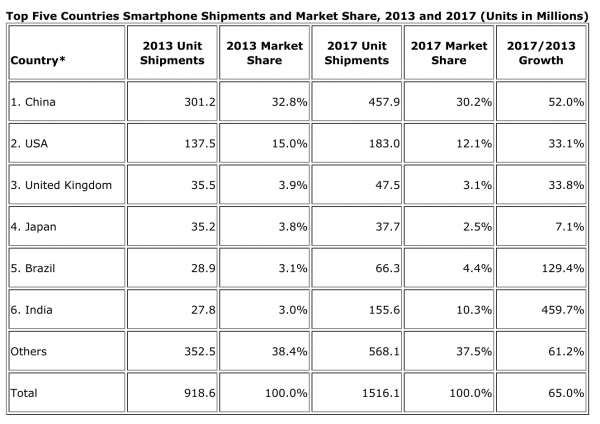 But, of course, there are limits to how far and fast smartphone shipments can go in the country. "Even as China starts to mature, there remains enormous untapped potential in other emerging markets like India, where we expect less than half of all phones shipped there to be smartphones by 2017, and yet it will weigh in as the world's third largest market", Chau says.

Brazil and India are two other markets to watch. "Brazilians have yet to turn in their feature phones for smartphones on a wholesale basis", Bruno Freitas, IDC consumer devices research manager, says. "The smartphone tide is turning in Brazil though, as wireless service providers and the government have laid the groundwork for a strong smartphone foundation that mobile phone manufacturers can build upon".

IDC's analysis jives with a study Pew Internet released last week about mobile phone habits. The organization finds that, combined, 65 percent of Brazilian adults 16 or older have feature or multimedia phones. In India, 80 percent of adults use feature phones.

2 Responses to Smartphone shipments surge ahead of lesser mobiles -- Brazil, China and India lead the way