Earlier today, following the "something BIG" teaser, Finnish maker Nokia took the wraps off a 4.7-inch, entry-level Windows Phone 8 handset, called Lumia 625. The new device features the largest panel that the company ever offered alongside the tiled smartphone operating system.

The Lumia 625 packs a 4.7-inch display with a resolution of 480 by 800 (201 pixels per inch density), that can be operated using gloves, and is powered by a 1.2 Ghz dual-core Qualcomm Snapdragon S4 processor, 512 MB of RAM and a non-removable 2,000 mAh battery. The device comes with 8 GB of internal storage and a microSD card slot (can extend the capacity by a further 64 GB).

In terms of battery life, for the Lumia 625, Nokia quotes up to 15.2 hours of talk time on 3G networks, 5.8 hours of video playback, 8.7 hours of web browsing via Wi-Fi and 90 hours of music playback.

The Lumia 625 offers a 5 MP back-facing camera with LED flash, that can record 1080p video at 30 frames per second, and a 0.3 MP shooter on the front, that is capable of 480p (also known as VGA) video recording. Because this is an entry-level Windows Phone, Nokia doesn't add its PureView technology (that also offers optical image stabilization and other noteworthy features).

The Nokia Lumia 625 runs Nokia's Amber firmware. It is based on the second Windows Phone 8 update (that I discussed here), and, out-of-the-box, includes exclusive apps like Smart Camera, Cinemagraph, Panorama and provides access to the Finnish maker's enticing HERE suite (which is comprised of City Lens, Drive, Maps and Transit), Music, PhotoBeamer and other offerings.

According to Nokia, Windows Phone Store currently offers 165,000 apps, which represents a significant increase over the numbers -- 145,000 -- revealed by the Finnish maker during the Lumia 925 press event. 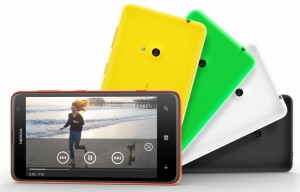 The Lumia 625 comes in at 133.2 x 72.2 x 9.2 mm and 159 grams. The smartphone will be available in black, bright green, orange, yellow and white trims. The back panels can be swapped, similar to other devices in the Lumia lineup.

The Lumia 625 will be rolled out in China, Europe, Asia-Pacific, India, Middle East, Africa and Latin America in Q3 2013. The Lumia 625 runs for €220 (without local taxes and operator subsidies).