You're probably about to notice a lot more ads in Gmail 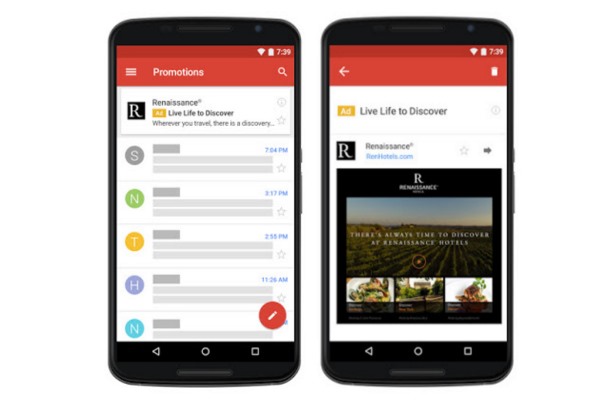 On the same day that Google unveiled its new logo, the company also slipped out some other news that didn't get quite as much attention. Considering the news means that Gmail users are likely to be inundated with more ads than ever before, it's hardly surprising that Google wasn't shouting from the rooftops, but that's what's happening.

Native Gmail ads are now rolling out to AdWords users, giving companies a new way to gain a presence in potential customers' inboxes. This is not spam. This is not a new way to start an email-based ad campaign. It's actual AdWord-triggered ads at the top of inboxes.

In fact, native Gmail ads are not entirely new; Google has been testing them for a couple of years now, making them available to a select group of advertisers. But now the ad format is being made available to all advertisers, and the potential benefits that could stem from the sheer number of people Gmail-based ads could reach means companies are sure to be quick to jump on board.

The ads sit at the top of the inbox in Gmail, looking for all intents and purposes like a regular email. But just like the Google ads you see littered around the web, you'll notice that these are targeted ads -- well, it is AdWord-based, after all. This means that your inbox will be home to ads that are related to the types of searches you have performed, the sites you've visited, and whatever other data Google may have collected about you over the years.

The new ad format is rolling out to the web version of Gmail as well as the mobile app. Google explains that native Gmail ads comprise two components:

An interesting characteristic of the ads is that although they are native ads, they can also be treated like emails. This means that although, initially at least, the ads are not included in your inbox they include options to forward them on to other people like emails, or move them to your inbox for future reference.

Google has been in touch with a clarification. A spokesperson for the company said:

Consumers won't see more ads as a result of this. The only change is that now advertisers can buy this format through AdWords ... [it will] translate to a bigger variety of advertisers whose ads might show, not more actual ads. The consumer experience will remain the same.