Nintendo Switch will be a failure 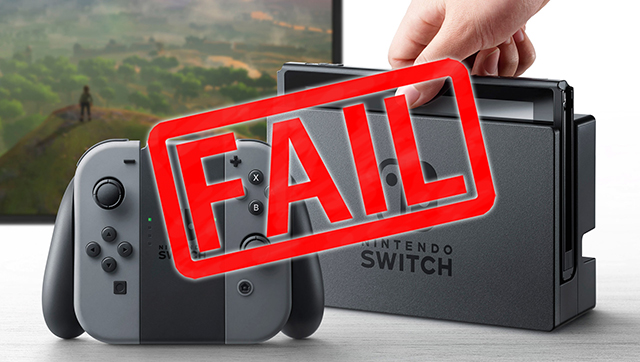 As someone born in the 1980s, Nintendo was a huge part of my life. I owned every one of its home consoles from the NES to the Wii. Yes, I even bought the Virtual Boy, which I still have. Unfortunately, I sat out the Wii U due to poor design and a lack of quality games. Apparently, I was not alone in not embracing that console, as it is largely considered a flop.

The company's latest console, however, got me very excited. The Nintendo Switch doubles as both a home and portable console, making it more useful. Based on the company's presentation, it looked very fun. I pre-ordered it immediately, for fear of it selling out. This was a good idea, apparently, as pre-orders are no longer available at major retailers. Here's the problem -- I am considering canceling my order, as it is looking to be a failure.

The biggest issue is a lack of games. On day one, there are only four games available in the USA -- The Legend of Zelda: Breath of the Wild, 1-2-Switch, Skylanders Imaginators, and Just Dance 2017 (Super Bomberman R makes 5). Except, I don't like Zelda. Even if I did, it isn't even an exclusive to the Switch -- it is a Wii U title too. Skylanders and Just Dance are designed for children, leaving 1-2-Switch -- a glorified tech demo that should have been included for free -- as the only interesting game.

Nintendo should be launching the Switch with a Mario title to get consumers excited, but a game starring the plumber (Super Mario Odyssey) will not come out until the end of the year. Mario Kart 8 Deluxe is due later this year, but like Zelda, it is not exclusive to Switch -- it is a refreshed Wii U game. Ultimately, I am spending $300 for a console with no exciting games on launch day -- it will be a brick.

For the sake of argument, let's say I did want Zelda. If I buy it as a digital download, it will apparently take up 40 percent of the console's internal storage. This is because the gaming tablet only has a paltry 32GB. Sure, I can buy a micro SD card to expand it, but that it just another purchase, driving the true cost of owning the console higher.

Yes, you can instead buy Zelda on a cartridge, but that is just one more thing to lose. Having to lug around multiple game cartridges in 2017 is a joke. For those with children, you know how easy it is for these to get lost.

Storage aside, the tablet can only do 720p when mobile, but can do 1080p when docked. With that said, many of the games will not support the higher resolution. In fact, the much talked about Zelda can only do 900p -- full HD is not available. How can the top launch title not even do 1080p? Even at 720p on mobile, the battery might only last a sad 3 hours according to Nintendo.

Another disappointing aspect is that online play will require a monthly subscription. I don't mind that, as both Sony and Microsoft does this with their consoles. However, on PlayStation 4 and Xbox One, subscribers get quality titles each month that they get to keep for as long as the subscription is active. Nintendo will instead offer a one-month rental of decades old NES and SNES titles. Seriously, Nintendo? Throw your faithful a bigger bone, please.

So here I sit in January with a very difficult decision -- should I cancel my Switch pre-order? Part of me is fearful to cancel in case I have second thoughts, but the realist in me knows that I probably won't use the thing as there are no games that interest me. Why buy a console on March 3 when Mario does not come out until Q417? I mean, after the failure that is the Wii U, does Nintendo really deserve my money based on future potential? I say no.

[UPDATE] While I am still not confident that Switch will be a success, I have decided not to cancel my pre-order. Super Bomberman R has me intrigued, and I have ordered that game.

436 Responses to Nintendo Switch will be a failure