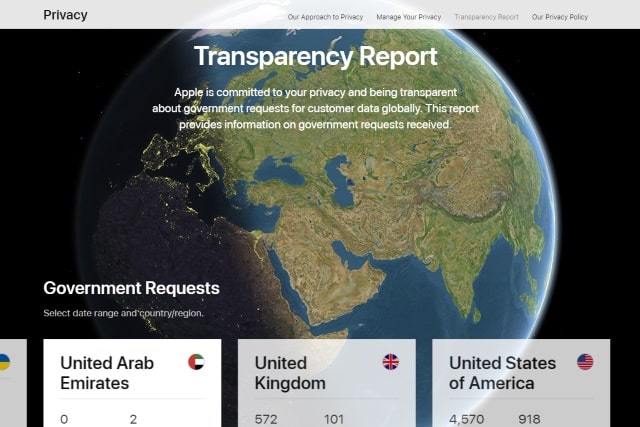 In recent years, technology companies have been under increasing pressure to be more transparent about the requests for data they receive from global governments. Firms such as Microsoft, Google and Facebook publish regular transparency reports, and Apple is no different.

Now the company has launched a new transparency report website which makes it even easier to trawl through its twice-yearly publication and see how many data requests have been issued by different governments.

While previous reports have been hard-to-browse documents that were a pain to sift through, the new site makes it easy to home in on data and easier to make comparisons between countries. A simple pair of drop-down menus makes it possible to specify a range of dates and a country you want to know about, and you'll be furnished with figures about the number of "device", "financial indentifier", "account" and "emergency" data requests have been received.

It is still possible to click through and see a traditional, static report for individual countries, but the new interactive elements make all of the data much easier to navigate.

Take a quick browse through the figures and you'll be able to see that there has been something of an increase in government requests for data -- up some 9 percent since the last transparency report. Of course, there is a limit to just what Apple reveals in the reports, but it is worth taking a look nonetheless.

Check out the full report over on Apple's new transparency report website.