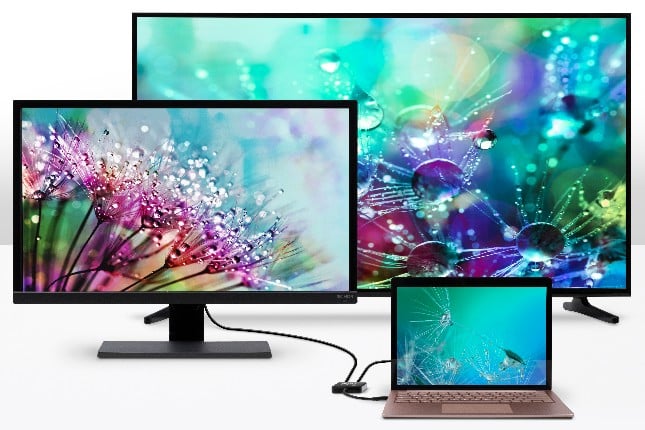 It is remarkable that as time marches on, laptops are actually losing ports. You'd think computers would get more useful over time, but actually, it is the opposite. Instead, notebook manufacturers are largely embracing USB-C, meaning customers have to buy dongles to regain the ports they need. This can be both a blessing and curse. As a positive, it looks better aesthetically and lessens the chance you will have outdated ports on your machine. On the negative side of this, not only do dongles and adapters cost money, but they are easily lost too. Sigh.

But hey -- at least we have companies such as Plugable producing affordable, high-quality dongles so our needs can be met. If you need to connect your laptop to multiple monitors, that company has a new adapter that should interest you. The USB-C DisplayPort 1.4 MST to Dual HDMI 2.0 Adapter can push two 4K monitors at 60Hz. This is important, as many similar adapters top out at 30Hz, leading to a very poor visual experience. Best of all, it is very inexpensive at under $40.

The company further explains, "The combination of DisplayPort 1.4 and MST capabilities lets users maximize bandwidth and convert the signal to HDMI 2.0 outputs to maximize compatibility with advanced 4K displays. This enables dual HDMI 2.0 displays with HDR from a single USB-C port with DisplayPort 1.4 at the full native performance of the system’s graphics processor. Thanks to this specific combination of DisplayPort and HDMI technologies, users can extend their laptops or phones to two 4K displays at resolution and refresh rates that were previously unattainable thanks to its DisplayPort 1.4 capabilities."

The Plugable USB-C DisplayPort 1.4 MST to Dual HDMI 2.0 Adapter won't hit stores for a few months -- Q2 of 2020. In other words, you cannot buy it until April at the earliest. Thankfully, it will be very affordable at just $39.95. Comparatively, a similar Thunderbolt 3 model, such as this one, costs more than $100!